You are here: Home / Books / The Harry Houdini Mysteries: The Floating Lady Murder 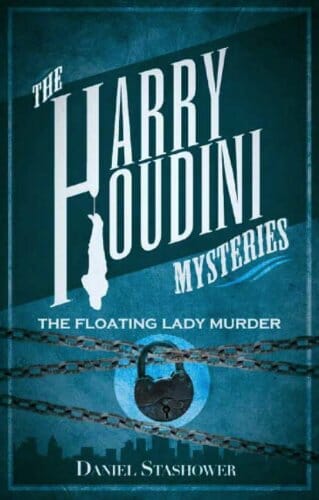 You know the floating lady trick. You’ve probably seen it on TV and watched how the stage magician gets his assistant to appear to float in thin air; but generally under a light weight cloth.

The premise of this investigation is that the Floating Lady trick goes wrong. Harry Kellar invented the trick and in this book it goes wrong. The girl plunges to her death. There’s a twist of course; it wasn’t the fall that killed her. She drowned.

The Floating Lady Murder follows on from The Dime Museum Murders, written by Daniel Stashower, and published by Titan Books, the book casts the famous illusionist Harry Houdini as the lead investigator.

The book begins with an aged Hardeen meeting journalists to talk about the death of Houdini. Hardeen, I didn’t know, was known as Dash to friends and also Theodore Hardeen. He’s Harry Houdini’s brother.

It’s easy to start to compare Houdini and Dash to Sherlock and Watson. It’s a partnership, a relationship, defined by how the two get on and the contrasts between them.

There’s also the similarities in the murder – just how did the floating lady die of drowning when she fell from a levitation magic trick?

It’s no surprise that Daniel Stashower has written Sherlock stories. In fact, he’s published The Ectoplasmic Man as part of The Further Adventures of Sherlock Holmes.

I quite enjoyed The Floating Lady Murder – I like the mystery and I like the resolution to the mystery. Stashower understands the attraction and writes to support it. When I started on the Harry Houdini Mysteries I had an expectation, a reason to read, and Stashower nails it.

Stashower has a narrative style I like. It feels like most of the book is narrative, characters discussing and sharing and that helps get close to them. After all, it’s not as if this is a murder mystery with a large cast of suspects in order to entertain us – we have the floating lady mystery and how Dash and Houdini solve the drowning.

The Harry Houdini Mysteries are a certainly ones that murder mystery fans should dig into.

Tabletop & RPGs The new Rolemaster opens for public playtest
TV Doctor Who: The Last Days of the Ponds
💰 Copper Coins 💰 Geek Native is an affiliate and may earn commission on purchases you make from third-party sites.
🍪 Privacy & Cookies 🍪 The site uses cookies to survive. By accessing the site, you agree to use your browser to control cookie use or take 1d4-3 privacy damage (tracking). If you defeat cookies via ad blocking, please consider the Patreon. An intro to cookies, and how to control them, can be found here. I Manage Cookies