You are here: Home / Books / Review of The Long Earth 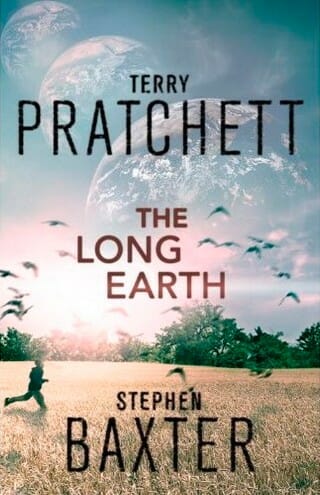 The Long Earth is a book by Terry Pratchett and Stephen Baxter. It’ll start with an admission. Although I was familiar with Pratchett and the Discworld series I wasn’t familiar with British sci-fi writer Stephen Baxter. Baxter is firmly established, a multi-award winner and responsible for the likes of Xeelee, A Time Odyssey (which was written with Arthur C Clarke) and the H.G. Wells sequel The Time Ships. Thanks to The Long Earth I’ll now dig into his work.

I can’t really say how much of Baxter comes out in The Long Earth but this does not feel like a traditional Pratchett book to me. There are some exceptions; I noticed how often elephants seemed to be popping up in the book – feels Pratchettian to me. There’s one moment of Pratchett humour that’s something of a set up too. You recognise the style, you prepare for the laughter – but, no, the book hits you with one of the most disturbing scenes in it.

Okay, so I just used the phrase “disturbing scene”, but the Long Earth isn’t a bleak sci-fi story or some grim alternative reality story.

The premise in The Long Earth is that there are more than one Earths and that these are now easily reachable by the public. You just need a simple device and the designs for that device were published on the internet for all to use. This resulted in “Step Day” when people first started to “vanish” to the alternative Earths. It’s okay; most of them came back – an in one instance, lots of children were brought back thanks to Joshua, who was a little more organised than the rest, and who becomes the main character in the book.

This premise is not spelt out as you begin to read. You’re left to work out it. GetGlue is full of Pratchett fans, checking into the book and expressing their confusion as to what’s going on, but I enjoyed working it all out.

The act of moving from one Earth to another is called Stepping. The act sometimes requires a little lateral movement because if there is an obstacle in your way in the other Earth then you can step, you need to walk until you find a space. This means you can’t step quickly from Earth 1 to Earth 100 because there’s bound to be some blocks. You’ll need to walk. The other reason you can’t step from Earth 1 to Earth 100 very quickly is that stepping makes you nauseous.

Actually, there’s no Earth 100. You can travel in two directions – known as East and West. So there’s an Earth 100 West and an Earth 100 East too. There’s infinite Earths.

There are two other significant and plot fantastic twists to stepping. The first is that iron can’t come through. The book debates why via character dialog but we don’t know for real. This means technology diminishes very quickly. No smartphones on Earth 1 West.

The second catch, the hugely important point, is that there are no humans on the other Earths. There are animals and if you go far enough out the animals are different to Datum Earth (or zero Earth, our Earth). Why? Evolution simply happened differently. In some cases geography happened differently too; which explains the changes in the landscapes and why evolution simply took a different turn (keep an eye on the elephants).

The book The Long Earth has this wonderful setting and tells a story of a simple idea – Joshua is hired to help find the end of the infinite Earths or, at least, to travel as far as possible.

I suppose, in a way, there’s a conclusion and an answer to that quest. We do find out more about the far end of the Long Earth (in one direction, at least) but it’s one of those endings that simply invites more answers.

That end, going as far as they can go, is not the end of the book. There’s a few more chapters. In those chapters we seem to be set up with more mysteries. This is a book that demands a sequel.

This is also a book that demands an RPG. The setting is great – infinite space for mankind. No need to farm, if we don’t want, to support the race. Infinite gold. Technologies high and low.

I recommend The Long Earth but only if you can run the risk of not getting closure on a great concept.

Disclosure: My copy of The Long Earth was provided for the purposes of review.

Review of The Long Earth

TV Doctor Who boss Steven Moffat deletes Twitter acco…
💰 Copper Coins 💰 Geek Native is an affiliate and may earn commission on purchases you make from third-party sites.
🍪 Privacy & Cookies 🍪 The site uses cookies to survive. By accessing the site, you agree to use your browser to control cookie use or take 1d4-3 privacy damage (tracking). If you defeat cookies via ad blocking, please consider the Patreon. An intro to cookies, and how to control them, can be found here. I Manage Cookies