This is an interesting idea for a game. Capcom have made Steel Battalion: Heavy Armor look very real and there are a few twists too.

This is a world without the semiconductor thanks to a microbe that started eating them all. The knock-on effect is that technology stagnates in some areas but continues in others – leading to these “vertical tanks”. Anime fans will call the low-tech mechs. It’s now 2082 and the world is at war.

Imagine the motions of reloading a canon or struggling with the control levers of a tank. Steel Battalion also uses Microsoft’s Kinect to harness those actions as the controls for the Xbox 360 game.

This levels even further with liveplay where you find yourself talking to fellow crew members – speaking commands and reassuring team mates.

The big question is – does all this work? Does the tactical-less nature of the Kinect actually lend itself to the feeling of struggling with controlling a tank?

The game is out now so why don’t you let us know whether you’ve had a shot and what you think of Steel Battalion in the comment section below. 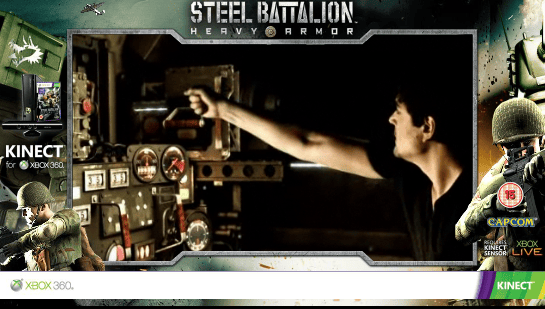