You are here: Home / Games / Tabletop & RPGs / Author Iain Lowson on the release of Resistance for Dark Harvest 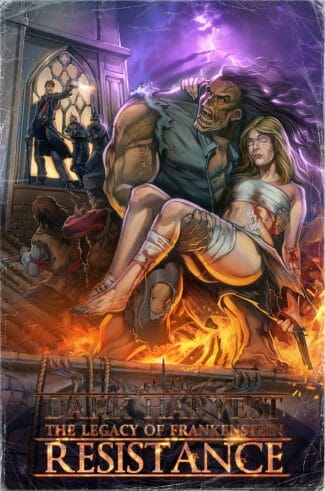 The RPG rules and mechanics in Dark Harvest: The Legacy of Frankenstein – Resistance have been helped along by Steve Ironside, Neil Wiseman and Colin Chapman. Art features from from Rowena Aitken, Corlen Kruger and Sara Dunkerton. Geek Native has been able to secure an interview with the Promethea game line creator and lead author Iain Lowson to talk about Resistance.

What does Resistance add to the world of Dark Harvest?

It might sound like a cop-out answer, but it ‘just’ adds more detail. With the core book, we had to stop writing somewhere or it would never have been published. We knew there was stuff we missed out, or could have gone into more detail about.

The supplement gave us the chance to get some of that in there. It also allowed us to work in suggestions we’d had from our amazing, creative, dedicated (and growing) community of readers and players. Oh, and reviewers too!

We wanted to move away from Victoriana a little more, and make DH:LoF even more of its own ‘thing’; hence the inclusion of the exhaustive equipment list from Colin Chapman. Because DH:LoF is set around 1910, we needed to get all that material covered. That said, Victoriana is incredibly relevant still if people run games set earlier in Promethea’s history.

Other than that… Hmmmm… I don’t want to get into just a long list of the contents! There’s masses of good stuff in there, with more to come. Again, we had to just stop and get this book out. There’s more to come!

Will gaming groups already in the middle of the DH:LoF game find it easy to incorporate Resistance into their current game?

Absolutely. There’s nothing in the book that means GMs and players have to throw everything away and start again. Rather, there’s masses of inspiration and clarification that’ll add to their enjoyment of adventuring in Promethea. Players will watch with growing unease as evil smiles spread across their GMs face while he/she reads Resistance.

What direction are you planning to take the Legacy of Frankenstein in? Is Resistance the first step on that road?

When we were writing Resistance, I sat down with the Aberdeen contingent (Magz, Neil and Steve) back in January to sort out all the rules stuff. We ended up chatting for hours about Promethea, and lots of that will feed into what we do next (along with reaction to the supplement). We’re wanting to do a scenario pack for next year – four or five adventures that can be linked if that’s what’s wanted, and can be played from the pov of any side in the conflict. That’ll be a fun challenge to write. Resistance is very much just one more step along the Promethean highway. :)

Are you pleased with the adoption of Dark Harvest so far? Is there anything you would have done differently given the gift of hindsight?

I’m delighted with how things have gone so far. Considering we launched in the same month as the Dr Who RPG, we did really well. More folks will join the fun with Resistance arriving, not to mention the other things we have planned over the next 12 months. The more the merrier, says I! All of us love to hear from the players, and really do value their feedback. Come visit us on Facebook!!

Done differently… The only ‘regret’ is not realising that Robert and I had used post-Cold War countries on the map of Promethea in the core book. We will get that sorted at some point and stick a corrected version on the website. To be honest, though, that’s a minor thing.

What two tips would you give to anyone setting out to run a Dark Harvest game for the first time who also wants to include Resistance?

Take your time to read through things, and take notes as you go – or write on the books! Make them your own. :) DH:LoF is likely to be different from anything you’ve read before, so don’t rush in with preconceptions.

However you introduce your players to the world, try to show them that nothing is quite as cut and dried, black and white, right and wrong as either side tries to paint it. Have fun!

Author Iain Lowson on the release of Resistance for Dark Harvest