You are here: Home / Games / Mobile / Dragons Vs Unicorns – can there be a winner?

Last month Geek Native directed you to a Kickstarter for Zombies Vs Werewolves and asked which side you would back. Turns out that not many of you back either side; the campaign only raised $3,400 of the $7,500 goal.

Step forward another challenger – and this time they need to raise an incredible $45,000 in just 26 days. Can Dragons Vs Unicorns do it?

The biggest difference between “Zombies Vs Werewolves” and “Dragons Vs Unicorns” is that the former was a card game and the latter is far more ambitious. Co-founder Keren Kang talks about Android and iOS – as well as browser game.

It seems that Dragons Vs Unicorns has its targets set along the lines of Plants Vs Zombies or even the Angry Bird model.

I sense this is a big deal for Digital Harmony Games. Their Kickstarter talks about allowing the studio to remain independent. That, at least, is worth a post. 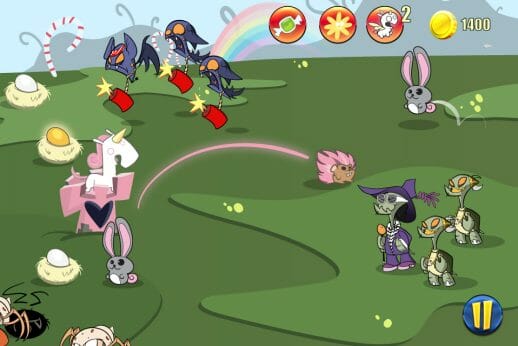 "Wait! I got a spell for that!"
Mobile

Dragons Vs Unicorns – can there be a winner?