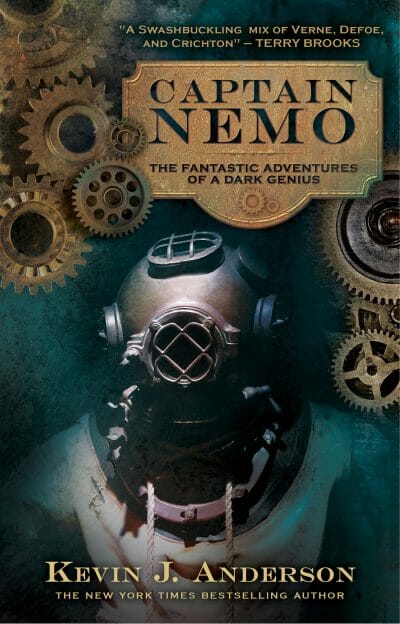 Kevin J Anderson is a prolific author who’s written a huge number of great books. Geek Native readers may recall from our interview with the writer that Captain Nemo is one of his favourite efforts. Unfortunately, that’s not the case for this blogger. Captain Nemo is not one of my favourites.

The book is a mashup of fact, fiction and re-fiction. Imagine that Nemo was a real person – the boy of a Parisian ship builder and that Jules Verne is his friend. They both dream of adventures but when they try and escape the humdrum of Paris and Verne is yanked off the ship by his father that it is only Nemo that gets to go.

You already know the adventures Nemo has. We may track him from boy to man but if you’ve read any of Jules Verne – or perhaps just seen some of the movies for 20,000 Leagues Under the Sea or Around the World in 80 Days – then you’ll know what happens next. It’s just a matter of watching how the elements of these books come into play in the book and whether you enjoyed the interweaving or not. I enjoyed Nemo washing up on the desert island, making the most of it and the remarkable events leading up to his escape.

I rather like Jules Verne’s novels; well, the translations I’ve read – but I certainly like his imagination. Perhaps that’s why Captain Nemo does not score A+ with me. The suggestion in the book is that Verne, although a hard worker, has neither the get up and go to have his own adventures nor the imagination to be a great writer. He has to steal Nemo’s adventures for himself, re-write them and publish them via a marketer-cum-publisher. Without Nemo; Verne would be nothing. It’s that conflict that is ultimately responsible for the portrayal of Nemo’s death.

I did keep turning the pages on Captain Nemo. It’s not as if I put the book down and moved on to something else to read – and my to-read pile is fat and tempting. The reason I kept on turning the pages is that Anderson creates believable characters. You may not like them all but they all seem real. It mattered tome to find out how some of the relationships worked out. It mattered to me to find out which of the fictional or historical characters would land on the good side of the tracks or the bad.

That’s the irony of Captain Nemo. In some ways you might say the book should be about the adventures – about the fantastic journeys – but it’s actually about the people and the relationships they have. It’s just that the only prism for those relationships we have to look through is the adventures Nemo manages to find himself in.
There’s no doubt that Kevin J. Anderson fans will like this book – many of them will like it more than I did. I’m also pretty sure that Jules Verne fans will give the book ago and some will like and other, like me, bristle at the treatment of Verne even though it’s a work of fiction. Ironically, fiction fans who aren’t that familiar with Jules Verne might enjoy Captain Nemo the most – they’ll be surprised by the great adventures and will marvel at their scope.

Disclaimer: My copy of Captain Nemo was provided for the purposes of review