You are here: Home / Geek Stuff / Interviews / An interview with Kevin J Anderson 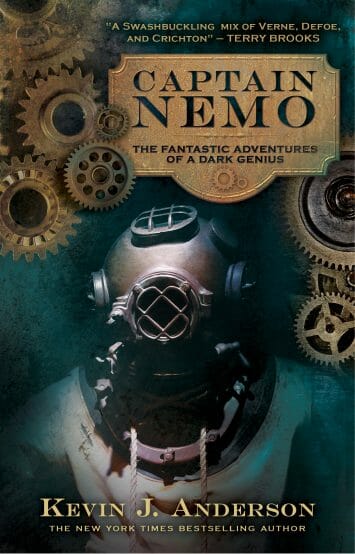 A new edition of Captain Nemo: The Fantastic Adventures of a Dark Genius out and available to buy thanks to Titan Books and popular sci-fi Kevin J Anderson. Over on his blog, Kevin noted that this edition uses his preferred text.

This blogger was once told that Jules Verne had a special fondness from Scotland – from where this blog is written – and that Edinburgh may have inspired the great man. The caption above the gates of Edinburgh castle reads; “Nemo Me Impunge Lacessit”. A common translation of which is “No one attacks me with impunity”. Verne, of course, wrote “ Twenty Thousand Leagues Under the Sea” which is the book that originally cave us Captain Nemo.

Geek Native has been very lucky to score a Q&A style interview with Kevin J Anderson himself. Let’s dive in!

Q1. For Geek Native readers tempted to pick up a copy of Captain Nemo can you give us an author led insight into the lure of the book?

CAPTAIN NEMO is for anyone who’s ever been captivated by the magic and imagination of Jules Verne: balloon voyages, mysterious islands, sub-marine boats, at a time when such things were the purest science fiction. With the popularity of Steampunk, this story becomes much more relevant and intriguing, and I loved describing the fantastic adventures of a character who inspired Jules Verne’s fantastic novels.

Q2. You’ve said that you invested three years of your life researching Jules Verne. It sounds like Frenchman’s life story is something of a lure for you. What makes him and his work so interesting?

As a kid, I grew up with the series of marvellous films inspired by Verne’s work: 20,000 LEAGUES UNDER THE SEA, AROUND THE WORLD IN 80 DAYS, JOURNEY TO THE CENTER OF THE EARTH, THE MYSTERIOUS ISLAND, FIVE WEEKS IN A BALLOON. I have always been fascinated by this visionary author and how he shaped the genre of science fiction, so I began a lot of research on Verne’s life itself, as well as reread Verne’s classics. I was surprised to learn that Jules Verne himself was a complete homebody, traveling almost nowhere in his life, and yet his imagination took him everywhere.

Q3. Do your works of science fiction tend to date and effectively have a ‘best read before’ date?

I’ve done some high-tech thrillers with Doug Beason, ILL WIND, IGNITION, LIFELINE, which are more closely connected with modern-day events and technology, and now 10-15 years after original publication, they do seem dated. Most of my SF, however, is set far enough in the future, or in the case of CAPTAIN NEMO…in an imaginary past, that they should be good reads for quite a while.

Q4. From among your work, Captain Nemo is supposed to be one of your favourites – what are the others? Is there something common about them that elevates them to the lofty position of favourite?

I am a very prolific writer and I enjoy the projects I write, but sometimes a certain project really captures my imagination. CAPTAIN NEMO was one of those, sparked my fascination and sense-of-wonder from what drew me to science fiction in the first place. My two other most-engaging works, I’d have to say, are my big SF and Fantasy epics The Saga of Seven Suns and Terra Incognita. Both of those series are huge world-building efforts with large casts of characters, something I could sink my teeth into.

Q5. What are your top three all-time favourite movies?

I really enjoy brainstorming ideas with authors I respect, kicking possibilities around, seeing where the story goes, and so I have been quite successful working with other authors. Brian Herbert and I are on our 12th novel together; my wife Rebecca and I have done 32 books together; Doug Beason and I did 7 novels together. We figure out how to make it work.

But in other cases, I just want to play with my own toys and take my ideas wherever I want to. Fortunately, I can do both, and I plan to keep doing so!

Q7. Who would you most like to write with from amongst science fiction authors you’ve yet worked with?

I have always admired and respected Terry Brooks and we’ve been friends for a long time; I’d love to see what we can come up with.

Q8. It’s awesome that you’re on Twitter. Other than yourself which three accounts would recommend readers follow?

An interview with Kevin J Anderson