You are here: Home / Books / Comics / The Thrill Electric teaser

It was during the run up to MCN Expo – the London Comic Con – that news broke about The Thrill Electric. The Thrill Electric is a manga-style motion comic that’s been produced by Hat Trick Productions and Channel 4. Writers Leah Moore and John Reppion are involved.

C4 Education have published a promo preview video of the motion comic on YouTube. The target audience is underlined given that it’s C4’s Education arm that’s pushing the video but everything about the free to download graphic novel looks to be first class. 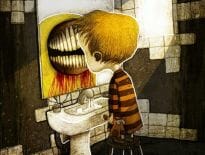 Art The wonderfully sinister art of Berk Ozturk
💰 Copper Coins 💰 Geek Native is an affiliate and may earn commission on purchases you make from third-party sites.
🍪 Privacy & Cookies 🍪 The site uses cookies to survive. By accessing the site, you agree to use your browser to control cookie use or take 1d4-3 privacy damage (tracking). If you defeat cookies via ad blocking, please consider the Patreon. An intro to cookies, and how to control them, can be found here. I Manage Cookies