Huzzah and Bravo to the Wyrd Winners! So-close to the runners up. So close, in fact, that after writing this introduction but before putting this page live the Wyrdmaster is going to re-count the votes just to be sure.

Votes? Votes! 4, 771 votes! Thanks to the RPG internet community for making the Weird GameWyrd Game Awards so successful; these awards matter and they’re just in their first year, and just being nominated helps promote RPG companies large and small.

Is that the Weird GameWyrd Game Awards done until the end of the year? Oh no! If you thought one of the twelve awards was too boring, too silly or even if you have a better suggestion – then go forth to the Awards Awards Nomination page. There you can vote to have one of the current awards booted out and you can suggest a better one. If by the end of the year there are enough votes against an award and good suggestions for a better one then we’ll make the switch official. What’s that mean? It means one of the Wyrd Winners below might not just be the first to win the award – but might be the last too! Now that’s an exclusive award.

Possessor of the Wow Factor

The Most Exciting New Company to Emerge in 2003

The Most Improved Company in 2003

The Author Most Likely to be a Caffeine Powered Robot

The RPG or Supplement Most Likely to Amuse Evil GMs

» Book of Vile Darkness (Wizards of the Coast)

The RPG or Supplement Most Likely to Improve Your Campaign

The RPG or Supplement Most Likely to Inspire Good Roleplaying

The RPG or Supplement Most Likely to Spark the Imagination

The Most Original RPG or Supplement

» All Flesh Must Be Eaten (Eden Studios)

"The essence of a role-playing game is that it is a group, cooperative experience." - Gary Gygax
Weird Awards 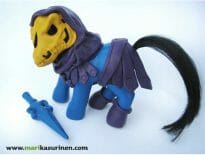