You are here: Home / Books / Betrayal at Falador review 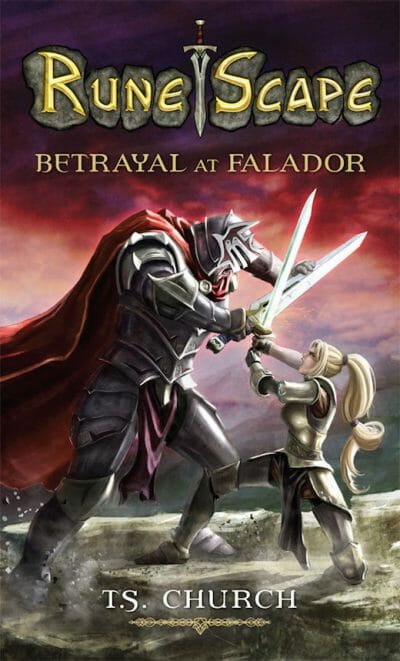 Betrayal at Falador is the first official RuneScape novel. Jagex are doing great things with the brand and extending the reach of the game via the fantasy novel route only makes sense to me.

The novel is by T.S. Church and published by Titan Books. While Betrayal at Falador is the first RuneScape novel it may not be the last. The book concludes with a single page plug for the next T.S. Church RuneScape offering; Return to Canifis.

One of the good tings about T.S. Church writing the book is that he is a RuneScape player (well; so says his bio). I dabbled in RuneScape many moons ago and my feeling of the book is that it does a pretty good job at invoking the flavour of the world. That said; there is quite a lot of horseback action in this. One of the main characters is a squire to the white knights of Falador and yet, as I recall, horses are not an easy creature to get a hold of in the game.

The plot is typical for a high fantasy. During the height of a storm a mysterious woman turns up in the knight’s castle in Falador. The year is 164. She soon decides she can talk to squire Theodore. However, things do not run smoothly. Remember; the book is called Betrayal at Falador. You get no bonus experience points for predicting a betrayal.

As the year is 164 this is also prequel. That’s five years before the current RuneScape timeline.

As this is the birth of a high fantasy series you should expect the plot to unfold and characters for the group to be introduced. Quite quickly do we progress on from Squire Theodore and the mysterious human girl with the dwarven name to having a proper adventuring party. In fact, the phase “the adventures” is used fairly often. We’re given a wizard early on. Then Doric the dwarf who has, perhaps, the best introduction to a group of adventuring and young humans I’ve read in a while. In fact, it’s an idea worth stealing by GMs around the world.

Rather nicely there are even characters introduced who don’t feature significantly in Betrayal of Falador but who we might suspect of being re-introduced later on in the series. I do like it when the author thinks ahead like this. It leads to a greater feeling of consistency.

We’re quickly given one and then a second arch enemy. It takes a little while for those two plot strands to meet up and thread together. It’s perhaps a little awkward when they do but it quickly becomes, I think, the central strand to the book and the reason to look forward to the sequel.

I sped through the book in no time at all. It was an easy read. I tend to do most of reading in airports and on short haul flights so books that get too clever with purple prose tend to be quickly put aside. Betrayal of Falador doesn’t make this mistake and pitches itself exactly right – at people wanting a quick and easy escape into their RuneScape world.

Church may take this a little too far at times. Whether it’s due to the need to convey a story of fairly epic proportions in just a single book, whether there’s the expectation of a fairly young readership or just the desire to keep things simple – we’re told, rather than shown, what the characters are thinking and feeling more often than not. This is especially true of the inter-group relationships.

The plot will not leave readers scratching their head and trying to keep up. There is mystery – who is behind the betrayal – but this not a who dunnit. The plot twists come at you in the same way as a rapier might; with feints and lunges, and you’ve the choice of just reading through them and carrying on or trying to predict what the next twist will be. Both options work well but neither requires much mental finesse. The book ends with the clash of armies you’d hope for. Once again T.S. Church does extremely well in giving us twists and drama – and yet keeping it simple. Will Falador fall? It certainly seems likely. So are any of the twists unlikely? No. It all fits together well.

I enjoyed the book. Betrayal of Falador will do exactly what it’s supposed to do; build a richer, deeper world for RuneScape players and lure new blood towards the siren delights of the free MMO. I doubt the book will win any prizes, there will certainly be players w who nitpick at it – there are always those – but of that matters. Betrayal at Falador gives readers the RuneScape adventure they need.

Disclosure: I didn’t pay for my copy of RuneScape. It was supplied by publisher Titan Books. As per usual, it was made very clear to Titan (as happens with all suppliers) that a rubbish book would be called out a rubbish, lambasted, teased and mocked in public. They accepted those risks and delivered the book without pre-condition. 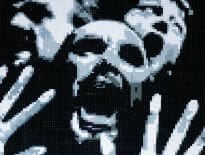