You are here: Home / Books / The Desert Spear review 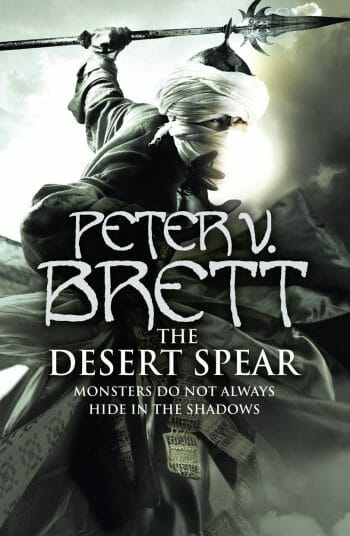 The Desert Spear is the second book in the Demon series. I think they’re already calling it the Demon trilogy but let’s not count our chickens until they’ve hatched like demonic drones from the core of the earth.

The first in the series is The Painted Man which simply took my breath away. What a fantastic book. I first became aware of The Painted Man because of it’s possible $100 million film deal. A deal that involves Jermey Bolt, the UK based producer of the Resident Evil franchise. It’s also worth noting that the book was initially published in America as the Warded Man. I imagine some “clever” marketing market research thought The Painted Man was a bit too close to painted lady and so the book was subject to a rebranding.

Peter V. Brett also wrote the Painted Man on his HP iPaq while commuting to and fro work. That had a profound influence on his writing; the Painted Man is perfectly written with tight, punchy and yet highly descriptive English. I don’t know if Brett wrote The Desert Spear in the same way, I doubt it, but the good news is that the writing style remains. This is a page turner.

The big leap of faith to take with The Desert Spear is that it doesn’t lead with The Painted Man himself. It leads with Jardir instead. Jardir is a significant character already in the first book. In this, the second, we roll back the years to follow Jardir as a boy and as he starts his incredibly harsh training.

Brett doesn’t abandon the trio of characters from The Painted Man either. The result is that we nearly double the number of characters we’re following by the end of The Desert Spear. It works. If the book wasn’t such a page turner and if I’d therefore read it over a longer period of time there would have been the risk of getting lost but even then my gut feeling is that Brett’s skill would have saved the day.

The real challenge with starting with Jardir is this; the audience doesn’t like him. You see; Jardir already revealed his cards and to go back to view him as an underdog is a challenge.
Amazingly, Peter V. Brett actually manages to make this work. Some of this is due to a whiff of smoke and some small mirrors. We’ve got the jump back in the time. We’ve got the fact that the desert people have a naming convention that isn’t Western. That makes it easy to remove the young Jardir from the character we’ve met already in the Painted Man who often uses another name.

Once this challenge is met then The Desert Spear really begins to pack a punch. The reader might find themselves asking questions like “Who is the Painted Man, really?”. Gosh. If the American copies of the original book also localised the text so that any reference of “Painted Man” was replaced with “Warded Man” then the uncertainty would be even higher.

I had hoped that The Desert Spear would move the plot on further. That’s the hope of every reader as they start the second book in a series. Of course, it never happens. The Desert Spear gives us twists and turns; it introduces new actors onto the stage and they become involved in the story.

All in all, despite some initial concerns that the book wasn’t take me where I wanted to go – The Desert Spear is a fantastic read. It’s not quite as strong as The Painted Man but’s still a titan among pathetic flood of me-too fantasy lookalikes. I highly recommend it and the Demon Trilogy. 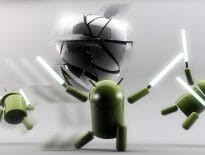