Siegebreaker Games will launch a Kickstarter this spring for a 5e post-apocalyptic Shattered Worlds RPG.

The guide from Dmitry Nosovky, Je Shields, Dean Spencer et al tells of the fracture and the breaking of the veil between different worlds. The result is a gritty setting merging tech and magic.

Set 20 years after the fall, an event which brought armies of demons from the Abyss, magic and nuclear fire and over 90% of humanity being exterminated, the RPG picks up with the survivors.

In addition, the game offers 60 modern small arms rules for 5e and grenades, missiles and mortars.

If all that sounds like one messy combat on the ruins of the world, siegebreaker also says;

Against this backdrop, like pieces on a giant chess board; demons, devils, liches, elves, humans, and others vie for survival and superiority. These factions and many more are destined to become the player’s allies, their nemesis, or possibly both as they explore the war-torn landscape. 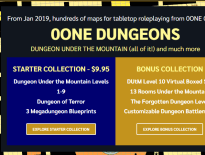 Tabletop & RPGs Hundreds of interactive battle maps: 0One Games re…
wpDiscuzComment Author Info
Manage Cookie Consent
This site uses cookies 🍪, and links are ads that may earn bloggers some money 💰, and with this alert, I very much hope that these dark truths 🧌 are acknowledged.
Manage options Manage services Manage vendors Read more about these purposes
Preferences
{title} {title} {title}
Loading Comments...