The funding goal has already been met, pretty much as the campaign launched with over 600 backers at the time of writing. There’s also a free download demo along with videos on the pitch page.

So, how does this work? There are different categories of characters represented in the cards, as well as their Roles, Personality, Motivations, Flaws and Intrigues. The combinations quickly add up and layer together to create all these variations.

The five core categories of characters are;

There’s a PDF preview for free available from Nord, which shows 22 pages of the content. Character generators are popular so this is a generous demo.

There are early bird tiers which expire in about 2 days and include access to add-ons.

Currently, there are only early bird and retailer tiers available, but Geek Native has a media pack from Nord from which I can extract some prices. I’ll call them out when I know them.

Equally, the early bird box set of 300 tarot-sized cards is set at $45. A $5 price increase is expected once the opening tier runs out.

Lastly, the $100 tier has both the digital and boxed set and the Oracle Story Generator set.

The retailer tiers get serious, with the top one costing $600 for 24 copies of the box set.

Nord estimates that the digital edition will be available this month, but the physical cards not be until January 2024. 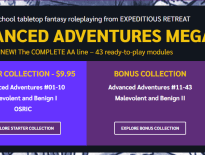