Have you ever wanted to understand what Roy Batty felt dying in the rain or roleplay a burnt-out cop like Rick Deckard facing not just your own mortality but also the loss of life replicants are programmed with? Not just as a viewer of passive entertainment but as one of the primary drivers of the action and emotions? Blade Runner the Roleplaying Game, may be just what you need.

My thanks to Free League for providing me with a review copy of the Blade Runner RPG Rep-Detect bundle, which includes the 240-page full-color hardback Core Rules, the boxed Starter Set including Electric Dreams – the first full-length Case File (along with custom dice, cards, and a host of maps and handouts in a case file folder), and a Game Runner’s Screen in landscape format. I need to pause a moment and marvel that this core rulebook, like Alien, is a saddle-stitched (no cheap glue) full-color hardcover with maps on the inside covers and is less than $50. The quality is amazing and the price is outstanding.

Imagine living as a have not in a future LA dominated by poverty, corporate overreach, moral quandaries, and violence. Blade Runner takes the Year Zero Engine system and couples it with investigation and existential character drama that will change and mark the player characters who survive. Does the RPG give the GM and players the tools they need to build the world of neo-noir dystopian Los Angeles streets in an alternate 2037?

As a player, you need rules that interact with human and replicant fragility and flaws. You need to be grounded in the grimy, violent streets of 2037 LA. You need a small amount of important gear and mementos. And you need to face moral quandaries, ugly violence, and poverty juxtaposed against a sci-fi setting of flying cars, space travel you’ll never experience, and technological wonders we don’t have in the real world.

As a GM, you need a setting fleshed out enough to ground the player characters in. You need rules to challenge them both on a roleplaying level as well as a physical level. You need something for them to investigate. And to bring 2037 LA to life, having random tables available to help you generate these challenges will not only take some of the burden of creation and responsibility off your shoulders, it will also give LA a life of its own that neither you nor your players completely control. This lack of control will be felt by everyone at the table, thereby enhancing gameplay.

So how does Free League do? I’ve played Alien, so I expect this RPG will deliver. Let’s find out.

The Core Rules open with a map of LA as endpapers. Art depicts LA in a mix of black smeared with dirty color. Quotes from the world and artifacts pulled from the setting (a 2037 dictionary definition of blade runner) kick things off. The setting gets some history and description, then the players are given what being a blade runner will be like including key themes in the game and roleplaying a blade runner. The Game Runner (the gamemaster) will use Case Files as adventures, hopefully enriched with handouts, maps, and mugshots. Timers may force the PCs to split the party and in this RPG that is encouraged. Downtime to develop personal stories is part of the game as well.

Character creation consists of 15 steps. Archetypes are broad roles like analyst, doxie, and enforcer that the PCs pick. In setting, if human, they determine how many years they’ve been on the LA police force. PCs can be human or replicant or even a possible secret replicant. Damage effects Health and stress effects Resolve. Each PC rolls for a Key Memory from a series of five tables, rerolling any results that don’t seem to fit. Same for three tables for a Key Relationship. Gear includes a signature item along with standard issue gear. Finally, each PC determines where home is.

PCs increase training and connections at LAPD by earning Promotion Points by successfully completing parts of a Case File. PCs earn Humanity Points through compassion and using their Key Memory and Key relationships. Replicants also earn them by failing a Baseline Test. Humanity Points are spent to increase skills.

If I create a PC for Blade Runner, I’m going to be part not only of LA itself but also the LAPD. My memories and relationships will be partially my own but also a random part of my life I didn’t have complete control over. I might be playing Fisher Vaas, an analyst, saddled with OCD and a god complex and wrapped in an emotionally guarded scarf. I have a parent in my head constantly telling me to quit my job. I remember making an unforgivable compromise as a child that still haunts me.

As a Game Runner, I have rules for combat, chases, vehicle mayhem, and more. I also have even more in-depth knowledge of LA. LA gets broken down into key Sectors complete with many maps. There is also a huge list of detailed NPC information to draw from, including replicants. The Rep-Detect Unit gets detailed, along with resources PCs might need to pull from. GRs also have detailed information on how PCs build reputations and solve cases. Gear gets special detail, especially guns and spinners (flying cars).

Finally, the GR gets detailed guidance on running Blade Runner. Advice on handing out Promotion and Humanity is covered along with some NPC stats. Random tables are included for downtime along with a detailed case file generator consisting of several random tables.

GRs with the Starter Set get an entire case file complete with handouts, maps, and props. Included is a poster map of LA, four pre-gens, 26 evidence handouts, 70 cards including NPCs, and eight dice. There is also a manila envelope for PCs to keep their evidence safe in. Armed with all of these extras, the GR has a clear example of how to make a case file. There is also a condensed rulebook, which could be used by the players around the table.

Blade Runner succeeds on all levels. The PCs will be generated through both player choice and semi-random events. The GR has plenty of details on LA and NPCs supplemented by a case file generator with many tables all of which can be randomized.

However, the game is not about solving cases. The core of the game is PCs facing moral dilemmas and letting them ask themselves who they really are. The Clues to solving a Case shouldn’t be too hard to find. It is only after the truth is revealed that the GR and players will reach the essence of what playing Blade Runner is all about: what it means to be human and what is a human.

This one is a winner for worldbuilding if the GR can commit to some work in creating Cases. The PCs will be encouraged in their roleplaying because character growth hinges on memories and relationships. Mature groups with a confident and strong gamemaster will build a nuanced world with a life of its own through Blade Runner the Roleplaying Game. 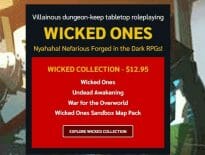 Geek Stuff Be the baddie! Bandit Camp kicks off 2023 with a W… 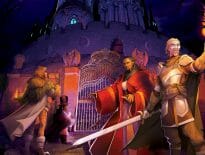