This is Audio EXP for the 26th of November 2022, and the title of this episode is “Money-movers worry about Hasbro’s plans”.

[The following is a transcript of Audio EXP: #173]

I have finally published the interview with Ben Nielson, and thanks to him, it’s a good one.

First, since it’s the end of the month and it’s been everything and busy, I want to remind Patrons that they have a few days left for the last RPG Publisher spotlight of the year. There are five candidates, and they are;

Ben’s based in Japan and is now full-time at Bandit Camp, which is an excellent insight to show his success. That’s down to talent, hard work and empathy. Remember, Wicked Ones, Bandit Camp’s flagship project, is free.

I asked Ben whether he had any advice for people just starting out publishing and designing and got back a vast, thoughtful, helpful message.

For example, from the “things not to do” list are tips such as avoiding making your first project your magnum opus as you’ll make mistakes, not focusing on advertising and with Kickstarter in mind, Ben recommends against letting backers into the creative process.

While I’ve been impressed with Bandit Camp, the people investing huge sums of money, and moving it around, are worried about Hasbro.

The money newspaper Barrons gets to the point quickly; Hasbro made money with D&D but seems to be greedy with Magic. Flooding the market isn’t how to manage a collectable game, and it cites the 42% drop in the auction value for the rare Black Lotus card.

I can’t help but compare that to Mongoose Publishing. They’ve weathered rocky times but now have a Paranoia Kickstarter, have the cyberpunk Shield Maidens coming out, Traveller and are looking to appoint a new director to spread management responsibilities around.

Furthermore, they give staff complete control of their working days and company direction.

If I could jump ten years into the future, my belief is that Mongoose will have weathered this coming recession and will be a superb place to work.

Speaking of time jumps, to help keep the interest in the Kickstarter for Space 1889: After, John-Matthew DeFoggi guest posted for the blog.

He wrote about How a Time Jump Can Serve Your Players and Setting.

Space 1889: After is a sequel to the Victorian sci-fi steampunk setting and uses a time jump itself, being set years later.

Another way to whisk up some interest in a forthcoming game is with a free primer or quickstart. That’s what Berin Kinsman and Lightspress Media have done with DoubleZero.

You can download the free DoubleZero: Primer now for a game that’s based on Traveller, GURPS and the old James Bond 007 RPG. The 20-page PDF has rules but also a commentary on design decisions.

Another way to promote an RPG is to get it into a bundle and I wonder if that’s what the pitch to companies contributing to the Bundle of Holding’s Cornucopia 2022 offer.

This is a Thanksgiving Deal, and it’s a great one. The Starter Collection tier costs $18 and has;

You might have one already, but I bet the others are titles you might have heard about and are a little curious.

The Bonus Collection has;

Furthermore, money from the bundle goes to support the Emerging Designer Program at the Diana Jones Award. That’s a good cause.

It doesn’t have Sandman, but it does have Murder Mysteries, Creatures of the Night, How to Talk to Girls at Parties and this little series called American Gods.

I’m in no position to publish a “How To” on anything related to parties but I am fooling around to try and learn Mastadon.

I’ve created a Geek Native account, which is pretty much a u-turn on where I was last week because I became curious about the migration process wherein you move from one server to another.

If the server you’re on now needs to shut down, perhaps it runs out of money; then in theory, you’ll have three months to move. In practice, well, there’s no way to enforce that.

The good news is that, so far, moving is easy enough, but I can’t confirm that as the server I’ve picked to move to has an application process. I’ve applied and am waiting to see whether they’ll take Geek Native. They might not, as I’m upfront about how the account mainly shares headlines, favouring to opt-out of banter to keep the noise-to-signal ratio in check. It’s the same as I do on Twitter, but the server admins might not want what could be described as a bot account.

Right now, three competitions are running on Geek Native. At the time of recording, there are 9 days left to win a dice pendant. I have several to give away, but there are 190 points on the ticker and each one is a chance of someone else winning. That’s for people in the UK.

For people in the UK or US, there’s a physical copy of the Savage Worlds setting The After. There’s only one up for grabs but also only 38 points on the widget. If you enter now with just one point, you’ve a 2% of being the winner.

Lastly, for people in the US, with 13 days left on the clock and only 14 points on the widget is a chance to win the Zweihander Fantasy Horror RPG Starter Kit. If you play the odds, that’s the best target for you.

So, let’s finish up there; good luck in those competitions, and I’ll see you next week. 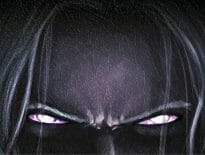 Books Order a R.A. Salvatore signed copy of The Dao of D… 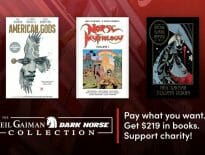 Comics Dark Horse puts the Neil Gaiman Collection up in a…
wpDiscuzComment Author Info
Manage Cookie Consent
This site uses cookies 🍪, and links are ads that may earn bloggers some money 💰, and with this alert, I very much hope that these dark truths 🧌 are acknowledged.
Manage options Manage services Manage vendors Read more about these purposes
Preferences
{title} {title} {title}