Berin Kinsman and Lightspress Media have released the 20-page primer for DoubleZero.

DoubleZero is a toolset for tabletop gaming. It works in any modern setting that does not favour characters with magical, paranormal, or superhuman skills. The rules engine is ideal for mystery, espionage, thrillers, procedurals, and drama.

DoubleZero: Primer is a system overview describing how things work and what you need to know to get started. There’s also insight into the concept and decisions behind the system, as well as why certain design decisions were made.

The RPG draws on the original Traveller, a sci-fi RPG, GURPS and Victory Games’ James Bond 007.

Berin Kinsman promotes safety and consent tools, and Lightspress Media also embraces a lo-fi philosophy for RPGs. That’s to say, books should be helpful and inclusive before they’re pretty. Physical books should be concise and portable, which reduces the price but not the creativity of those involved.

Playing DoubleZero is a collaborative creative endeavor. The goal is to allow every participant to express their imaginations, tell stories, and have fun together. The system is ultimately just a framework and a guideline. It exists to facilitate the players’ ideas, enable opportunities for the characters, and advance the possibilities of the setting.

The role of the gamemaster is to interpret the system as needed. Treat nothing in these pages as immutable and set in stone. Always err on the side of the spirit of the system rather than the letter of it. If everyone is having a good time, you’re doing it correctly no matter what the book says.

No, thank you! It’s a generous primer. 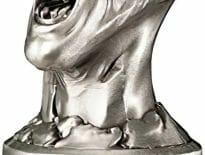 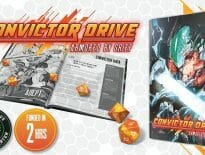 Tabletop & RPGs Convictor Drive: Armored by Grief – A Kamen …
wpDiscuzComment Author Info
Manage Cookie Consent
We use technologies like cookies to store and/or access device information. We do this to improve browsing experience and to show personalised ads. Consenting to these technologies will allow us to process data such as browsing behaviour or unique IDs on this site. Not consenting or withdrawing consent, may adversely affect certain features and functions.
Manage options Manage services Manage vendors Read more about these purposes
Preferences
{title} {title} {title}
Loading Comments...