You are here: Home / Games / Tabletop & RPGs / RPG designer John-Matthew DeFoggi on how a time jump can serve your players and setting

John-Matthew DeFoggi has written and developed for the 13th Age, Torg Eternity and the bronze age fantasy of the Jackals RPG.

It’s a bit of a coup getting some of J-M’s time for a guest post here on Geek Native. How did I do it? J-M is the lead at Strange Owl Games, which has Space 1889: After on Kickstarter. Kickstarters force guest posting slots into busy RPG designer’s diaries.

The Kickstarter project is for a sequel to the steampunk tabletop RPG Space 1889. Yeah, Victorian Age sci-fi. Since the sequel has a time jump (it is set after), there’s a win-win of asking J-M to spell out why gaming groups might even consider putting a time jump in their games.

Space 1889: After has hit its funding goal on Kickstarter and there is time to join the campaign. Art from the Kickstarter pitch page is used in this article.

How a Time Jump Can Serve Your Players and Setting

Katie: You see the shadowy figure leap from the balcony! You catch a glimpse of a silver star sewn into…

Katie: There is no way your character could…

Greg: Last time, the Cabal’s headquarters were in that magical ship under the bay, we should check there for clues!

Pretty much every GM has been in this situation. Whether you are playing in your favorite published setting or in your lovingly crafted homebrew world, the world can seem stale after a few campaigns. Players know the characters, the problems, and the status quo. Sure, there may be new adventures and threats, but it is easy to fall into familiar patterns—and it is hard to blame players for ‘metagaming’ when they are clearly as invested in the world as you are, and they were paying attention that one time when you explained that one detail! Worse yet, you may find it difficult to bring new players to the table, as they have to overcome the wealth of knowledge the veterans possess. What are you and your players to do, give up? Never! Instead, try a time jump.

A time jump involves creating a temporal gap to advance the setting between adventures or campaigns. This gap allows for substantial change to take place in the world—a shift between the old status quo and the new. The larger the gap, the more you can reasonably change in the setting. Each such change to the campaign world’s familiar tropes and themes is a new point of exploration for the players (and yourself) to encounter. Typically, the larger the change you plan to introduce, the longer the gap you want for your time jump:

Starting off a new campaign arc or campaign with a substantial time jump is an easy way to recreate the initial sense of wonder and exploration in a game. One advantage to this is it provides a new challenge without the need for players to learn a whole new setting. Old players can carry their previous knowledge with them, but may discover it fails to open the mystery boxes of the new campaign. Like a child at Christmas, they will wonder “what is in the box?” New players have a great place to start, as characters who just came of age during the time jump. If you use a time jump after an adventure, you may want to have your players give a short narration of what their characters did in the interim, or you can choose to explain how or why they were taken off the board for that period of time.

Benefit For GMs: The Mystery Box

The time jump provides gaps in your setting to pry open and play in, but you do not need to fill in all those gaps right off the bat. You can introduce the time jump, establish the new status quo, and then give your players mystery boxes that explain the gap… eventually.

You may be familiar with the term ‘mystery boxes’—they’re a narrative technique popularized by Bad Robot and J.J. Abrams in which mysteries are presented with no context, and unraveling or solving them becomes the focus of the show (and of much of the viewers’ free time during the Lost phenomenon). This technique allows you to practice your abductive reasoning skills in the game—you know A is true and C is true, and you use that knowledge to determine what must be true about B.

With a time jump, you know where you started (A) and where you ended (C). Instead of revealing it what caused the change (B) immediately, present the answer as a ‘mystery box’ for the players to open at a later time in the campaign. (Preferably, after your subconscious has had enough time to let the answer simmer and bubble to the surface… most likely in the middle of a meeting where you have no place to write it down or when a player blurts out a theory so good (or bad) that you immediately react with, “or it is THIS!”)

The time jump is not a revolutionary narrative technique, it is a common trope used in movies, television shows, and novels. We all know what to expect when the screen suddenly goes black and the text’ three years later’ appears. In fact, House of the Dragon recently employed this technique between episodes for most of the first season! As viewers, we are immediately intrigued by what may or may not have happened. We try to catch up, fill in the gaps, and determine why changes happened the way they did. If you use this for your game, you may be pleasantly surprised as your players begin to look at your campaign with fresh eyes and enthusiasm.

J-M DeFoggi is a writer and game designer who lives in Grand Prairie, Texas with his wife and son. He has written and developed for Shadowcraft, 13th Age, and Torg Eternity. Osprey Games published his Jackals: Bronze Age Fantasy Roleplaying and subsequent campaign and lore books, and he is now the Lead Developer at Strange Owl Games. You can find him streaming on the Iconic Production Twitch Channel, where he talks all things gaming twice a week on Behind the Screen. 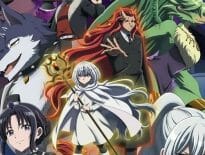 Anime The Tale of the Outcasts: Nuns with guns, furries …