You are here: Home / TV / Anime / Dramatic: Why Raeliana Ended Up at the Duke’s Mansion

Why Raeliana Ended Up at the Duke’s Mansion is an anime version of Micha and Whale’s manhwa. A manwha is, I believe, essentially a Korean manga.

This trailer is a cross between a romance and something more sinister. Spot all those secret sly smiles.

What’s our hero up to? She’s just trying to stay alive (and properly this time).

Junichi Yamamoto (More Than a Married Couple, But Not Lovers) will direct the anime for studio Typhoon Graphics.

The plot synopsis may be less sinister than those smiles and more familiar. Yen Press have the license for the English comic book, and they say;

Eunha Park was just a regular girl desperate to get into college, but when she finally does, her elation is cut short as she’s pushed off a roof—only to wake up as Raeliana McMillan, a character from a novel whose death serves as the catalyst for the story’s events. But Raeliana refuses to die a second time and is determined to change her fate, no matter what!

In Japan, the next issue of the manhwa is due out at the end of this year from Kadokawa. The anime is slated for 2023.

Dramatic: Why Raeliana Ended Up at the Duke’s Mansion 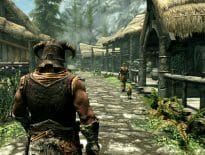