We’ve seen lots of competition in the virtual tabletop space. Some companies try to push into the 3d space, but we have seen few successes. Even D&D’s own Playspace news with Unreal Engine hasn’t been universally loved.

Brave Alice, though, has picked up a “Project We Love” from Kickstarter and hit the £20,000 funding goal quickly for RPG Stories. There’s still about a month to join the project.

What are the selling points? The 3d virtual tabletop leans strongly into its large world-building abilities and already has more than 1,000 models from fantasy, horror and sci-fi for you to pop into it.

Brave Alice is also offering to let Backer shape the roadmap. I suspect the Commercial-Free usage is a big draw to streamers who know they’ll be able to broadcast their games on the engine without additional fees.

However, some virtual tabletops charge the DM a pretty penny and let players come free. RPG Stories does not; players pay a little, and GMs pay a bit more.

There’s also the concern of vapourware with software projects like this, but Brave Alice convincingly presents RPG Stories as all-but-done.

You can back the project by offering cash and social shares. Those who offer at least £10 will get 1 player version of the download and Discord action. I think the £12 tweak is you, as a GM, get to add one player to your game.

If you are a GM or might be later, the pledge to get that version of the download is £30.

We’re dealing with software that’s licensed to one person and their machine versus the ability of someone running that software to let people into their game.

Can’t be bothered with that? A £50 pledget gets a party package, making getting going more straightforward, but that access paradigm still applies. 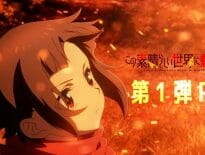 Geek Stuff Boom! KONOSUBA: An Explosion on This Wonderful Wor…