You know the drill; Amazon has a D&D placeholder online and in some markets.

The unnamed book will cost $49.95, weigh 1.25 pounds and be released by Wizards of the Coast on December 6th. Of course, all this could change, but that’s the Amazon data today.

One candidate is Shadow of the Dragon Queen, which was mentioned during D&D Direct, is due late 2022 and will be a Dragonlance adventure.

The Dragonlance Dragon Queen is probably Takhisis, a behind-the-scenes threat responsible for messing up the chromatic dragons in Kyrnn. Like a certain other dragon queen; Takhisis has many heads.

However, we’re also expecting a new D&D but not until 2024 for the Anniversary Edition.

Wizards of the Coast and partners like WizKids took the unusual step just this week of promising big news. On August 18th, WotC will stream with Jimmy Wong, Syndee Goodman and Ginny Di.

Next week, we will unveil some tarrasque-sized D&D news during Wizards Presents. Tune in to D&D Beyond’s YouTube or Twitch on Thursday, August 18th to watch exciting announcements and exclusive reveals together!

And is a Dragonlance adventure big enough to suit tarrasque-sized D&D news? 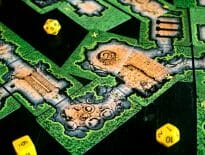