You are here: Home / Games / Tabletop & RPGs / Badlander is a dark 5e crowdfunding now from the creator of Vampire: The Masquerade

Mark Rein-Hagen has an impressive CV, a co-founder of White Wolf, Wizards of the Coast board member and the creator of Vampire, Werewolf and other World of Darkness RPGs.

The latest darkness is Badlander: A Fury of Thorns, a 5e (plus) powered swashbuckling setting with collaborative storytelling in mind. It’s just launched on Kickstarter, and you can see their progress on the pitch page.

It’s not yet been hugely illuminating, but there is a Badlander RPG Quick Start bundle on DriveThruRPG. It’s been there since May, but only with a sample character sheet. However, it may now be expanded with the Kickstarter live.

Swashbuckling and dark themes don’t always go together, but Lostlorn Games call it “Darkly Dashing” and suggests it’s a mixture of The Three Musketeers meets the Witcher.

Lostlorn is the publisher behind the project, and it is worth noting that Mark leaves the team to the writing and production in many cases. He is, though, the creator of this setting.

It’s a setting noted for;

With steel, grace, and cunning you serve the Crown as one of the legendary Thorns, exploring towering highlands, stormy blightlands, & sunken vilelands. The lowland kingdoms of Lostlorn survive only thanks to your Fury of swaggering gallants from the seven lander guilds. Weave new tales of swashbuckling, intrigue, and courage in a world reawakening to art, innovation, and the uncanny.

Where there is hope, there must also be those sworn to guard it. Grandmother Oak calls you to service!

You can help the project by sharing it on social media, and for just a $1 promise in cash, you’ll get BackerKit access, the Wanderer tag on their Discord and land in the update list.

The first reward tier for everyday backers is $29, which brings the PDF, 288-pages of full-colour content, and the Everborn Discord tag.

There’s a lot to Badlander with lots of supplements and expansions. At $48, these start to be added in; the TaleSpinner’s Guide sneak-peek, BloodStone Player’s Gazetteer, GM Cyclopedia and Covenant in PDF. Your tag now? Adept.

The Dashing Duelist tier, $65, updates that tag to Duelist and adds a digital map pack and the hardcover edition of Badlander.

There are seven limited tiers until the campaign tops out at $1,000 per pledge. That tier, by the way, has had two of the five places taken already. Rewards include signed books, multiple hardcovers and time working with Mark to design a god. Your Discord tag will be PatronNova, and everyone will know you’re wealthy and generous.

The estimated delivery on the project is November this year. Yes, 2022.

Badlander is a dark 5e crowdfunding now from the creator of Vampire: The Masquerade 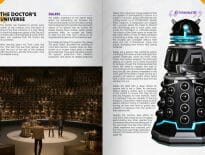 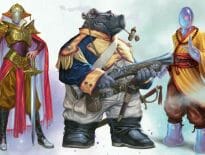