I’m not sure what’s going on, but everyone seems to be having fun despite some apparent danger.

I see cop robots, or at least some robot authority figure, and generally adorable fluffy creatures. There’s also lots of food, and while I’ve not seen any Precure before, I gather this is the usual thing.

Delicious Party Precure The Movie: The Dreaming Child’s Lunch is due out in September and supports the TV series Delicious Party♡Precure.

Delicious Party♡Precure is the 19th of the Pretty Cure franchise, which is available, depending on which parts you want to see, on Netflix, Amazon Prime Video and Hulu. This latest series is available via Crunchyroll.

Directed by Akitfumi Zako, this latest is apparently about “Cookingdom”, a dimension from which all our cuisine comes. The Recipe-Bon, the magical thing on which the recipe for every known dish, is stolen from Cookingdom. This, I think, explains the robot cops and all the good.

Life gets complicated when Energy Fairies start to arrive in the human world to track down the Recipe-Bon and grant three girls Precure power so they can help in the search.

Hello everyone! I’m Yui Nagomi! I’m a second grader in junior high school who loves to eat! In Oishiina Town where we live, Dreamia, a theme park for Okosama Lunchch, has suddenly appeared! It’s all-you-can -play, all-you-can-eat! Wow! I’m so hungry! Let’s all try it! There are many attractions makes me “Delicious Smile!” It seems that Kome-Kome and her friends were treated to Okosama Lunch by The headmaster, Cait Sith-san. Everyone was having fun playing together, but … What? Oh my God, Mari-chan has turned into a stuffed animal! Is there a secret to Dreamia …? Just like Okosama Lunch, if we gather our thoughts together, Kome-Kome will make a miracle !? 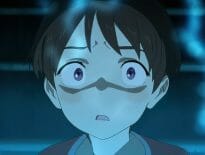