We first had a trailer/teaser for the archer anime Tsurune last year and during the Kyoto Animation show. Now, as Anime Expo approaches, we have a second.

Tsurune the Movie – The First Shot will hit cinemas in Japan this August. The TV anime it’s part of is still available on Crunchyroll in many markets. As it is the light novel by Kotoko Ayano that inspired the anime.

The story is about young men exploring the ancient world and the history of Japanese archery. It’s a sport and a way of life.

When Narumiya Minato joins Prefectural Kazemai High School, he is quickly invited to join the archery club by the club’s advisor, Tommy-sensei. His childhood friends Takehaya Seiya and Yamanouchi Ryohei swiftly agree to join, but Minato is hesitant at first. Because Minato is the rare student with experience in archery, Tommy-sensei orders him to give a demonstration, which Minato does… except his arrow doesn’t hit the target. It is revealed that Minato has developed a terrible dysfunction regarding archery. 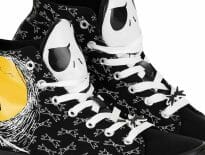