You are here: Home / TV / Anime / Meet some of the new crew in the dungeon-crawling Danmachi IV

Is It Wrong to Try to Pick Up Girls in a Dungeon? IV, aka Danmachi, has a new trailer and it we see some of the cast.

The show about professional adventurers, not about picking up girls, is running the latest series in Japan.

Crunchyroll has the first three seasons, but no sign of this yet. Hmm.

In Japan, though, the show is slated to stream on Amazon Prime Video, Netflix and even Disney+.

They describe the anime as;

Based off of a light novel of the same name written by Fujino Omori and illustrated by Suzuhito Yasuda, Is It Wrong to Try and Pick Up Girls in a Dungeon? is set in the world of Orario, where adventurers band together and look for treasures in an underground labyrinth known as Dungeon. However, for Bell Cranel, fame and riches are secondary to what he wants to find the most: girls. He soon finds out though, that anything can happen in Dungeon, and winds up being the damsel in distress instead!

Here’s a look at the new members of the Cranel group. Comics Have some Pride: Comics Are For Everyone bundle 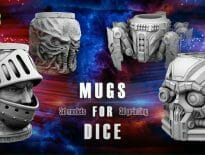