The final manga volume ships next month in Japan, but a new chapter will also be made for Ryusui.

The series picks up in a distant future after a mysterious flash of light turned all humans on Earth into stone. Eventually, the strange curse disappears, or people break free, and we have a few survivors.

Dr. Stone is unabashedly a science show with education seasons. The titular character is a geek who is determined science can be used right now, heralding a return of a golden age of humanity for the growing number of survivors.

The special edition has the main characters exploring the world via sea and introduces pirates (not sure how that works given the situation…) with a character called Ryusui.

The special edition airs in Japan on July 10th, and the new series starts in 2023. The National Museum of Nature and Science in Tokyo is involved in collaboration with the anime-makers, and a mini-exhibition runs until September.

Crunchyroll and Funimation both aired the first season. 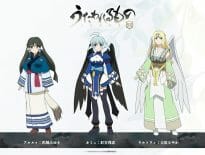