Vesper is due out at the end of September 2022 in the States. The sci-fi movie stars Raffiella Chapman (Annie from His Dark Materials), with the great Eddie Marsan, and was directed (and written) by Kristina Buozyte and Bruno Samper.

Buozyte is Lithuanian, Sampler French and they have collaborated before on Vanishing Waves.

After the collapse of Earth’s ecosystem, Vesper, a 13-year-old girl struggling to survive with her paralyzed Father, meets a mysterious Woman with a secret that forces Vesper to use her wits, strength and bio-hacking abilities to fight for the possibility of a future.

What does it take to survive? Vesper is about finding out as Chapman’s 13-year-old character has to take on the odds to look after her father. 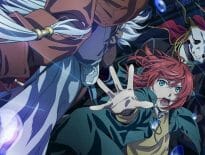 Anime The Ancient Magus’ Bride: The Boy from the W…