You are here: Home / Games / Tabletop & RPGs / Combat-hacking: How to Make Your 5th Edition Combat Iconic

Joshua Raynack is an experienced tabletop RPG designer who, as luck has it, has a Kickstarter live for a deck-building tabletop game in which players create their character deck even as they adventure.

Why is that lucky? Well, it means Joshua is disposed towards writing a guest post! In particular, I wanted to find out about some of the ideas from the Iconic System that could be translated into D&D 5E to speed up combat in games.

How to Make Your 5th Edition Combat Iconic

Combat is a swirling mass of blood, sweat, and bodies. Skirmishers often become caught off guard, disoriented, or relish in the simple act of spilling blood. It is pure anarchy where combatants act and react.

The Iconic Adventuring System, now available on Kickstarter, has a few tools that can improve combat in your 5th Dungeons & Dragons game – speeding up the encounter and creating the feeling of a swirling melee with characters acting out of turn.

When I created the Iconic System, it was not enough to create new mechanics or set of subsystems, it had to bring a new experience to the game table, to reimagine how we role-play. I had several advantages: the OGL (why reinvent the wheel, right?), the advent of deck building games, and none of the trappings of older editions (you know what I mean – those mechanics you gripe about, but loathe to throw them out – hit points, Vancian magic, armor class, etc. – because otherwise, it just wouldn’t be D&D – I’m looking at you, 4th Edition).

With that said, there are a few things we can do without from even our most beloved games. For starters, the length of combat. Therefore, let us share how a few game mechanics from the Iconic Adventuring System can speed up your 5th Edition Dungeons & Dragons combat.

First, for those not familiar with Iconic, let me summarize task resolution. Each player draws cards from a unique character deck. Should a player have no more cards to draw, shuffle the discard pile to reform the character deck. When performing a task, draw cards up to the chosen aptitude for the task. For example, if you have a Fitness score of 6, and perform a Fitness task, your hand size for the task is 6. Depending on the difficulty, the Game Master reveals one or more fate cards from the fate deck. Each card has a symbol, called an icon. The player then matches cards from hand to the icons on the fate card. The task is a success if the player matches all the icons.

Aside from card management, it also has resources, such as feat cards, which remain in the play area until discarded, and momentum, a group resource that builds as an encounter continues. Feat cards and momentum both serve to keep combat encounters quick and fun. While Dungeons & Dragons does not have either of these resources, we can take the philosophy behind the mechanics and apply it using the nuts and bolts of 5th Edition.

Iconic, like other RPGs, has keywords. One keyword is minion, and it is a term we stole from 4th Edition (I know I gave it flak earlier, but let’s face it, if it wasn’t called Dungeons & Dragons, people would still play it). In 4th Edition, minions had 1 hit point, therefore one good swing brought them down. While the mechanics are different (no hit points in Iconic), the philosophy is still the same. During combat in Iconic, you can discard a feat card from play to dispatch a minion and in cinematic fashion, regale in the glorious martial prowess that brought about its demise.

There are several methods to apply the minion keyword to creatures in 5th Edition. The most obvious is to reduce minions to 1 hit point. While this can allow for epic scenes of heroes wading through hordes of minions to reach the malicious mastermind, it does little to speed up combat. Though this concept works well for large battles, let’s focus on the several skirmishes adventurers encounter before the climatic showdown. While you can employ this method with a smaller group of foes, after the fourth encounter, players may begin to feel combat underwhelming.

Instead, keep the statistics as written in the Monster Manual (or whatever gruesome tome at your disposal), but add this variation: players vanquish minions with a critical hit. This second method still challenges players, does not skew game balance or encounter building, and keeps the thrill of a critical hit (no one gets excited with a crit against a creature with 1 hit point).

However, natural 20s are not too common. Therefore, adjust the range for the critical hit. For example, a player can crit a minion on a natural 17 or higher, or even 15 or higher. Whatever range keeps the momentum moving forward rather than bogged down in sluggish combat.

While this approach is in control of the fates, the last method places it in the hands of the player. In Iconic, a feat card is a resource, and a valuable one because it is an extraordinary act; a display of boldness – an automatic success. When a player discards a feat card, the player makes the choice, and in a role-playing game, agency can lead to the most intriguing situations. While 5th Edition does not have feat cards, there is another limited resource players can call upon: inspiration. It is simple. Players can spend an inspiration to defeat a minion as a free action.

With this method, it empowers through choice, and allows for that dramatic moment for the player to become the storyteller. Rather than, “I attack” coupled with a roll of the die, the player instead describes the demise of the poor minion by her hand. But does it need to be? How about a bar patron bashing it with a mug? Does the minion misstep and fall from the edge of a cliff? Does it brush against a strange flower that expels noxious fumes, knocking the minion unconscious? All fun and interesting outcomes, which can lead to a more memorable experience.

Iconic also has momentum, a group resource, which serves to speed up combat and, given enough time, overtake much larger foes. When a player succeeds with an attack task, the group receives 1 momentum. For each momentum in the pool, it adds +1 to damage. Once per task, players can also add momentum to the pool by discarding a certain type of ability card from hand, depending on the weapon they wield (a character with a maul discards a strength card to add one momentum to the pool) – regardless of a successful attack.

Therefore, even a “miss” or failed attempt can continue the momentum. In real life, while not able to damage an opponent, the character still serves to distract and threaten the foe, allowing for others a better chance of success. Furthermore, on a failure, characters learned something or are apt to try a different tactic, thus they also earn an experience card (it is a wild card to help with future tasks).

Including the momentum mechanic in 5th Edition is quite simple and there are several methods. The easiest is to add momentum to the pool for each successful attack. For each momentum in the pool add a +1 bonus to attack and damage. While overpowered, it can speed up minor skirmishes and move the adventure forward. When dealing with major encounters, feel free to leave it out.

For a more subtle method, grant momentum when a character misses. In this instance, momentum is not a group resource, but a personal resource. Again, for each momentum in the character’s pool, add a +1 bonus to attack and damage. Once an attack is a success, the personal momentum pool becomes 0.

To mimic experience cards in Iconic, you can refine this method even further, instead granting momentum to a character for a failure when the attack roll was a natural 10 or higher. The character understands what caused the attack to fail and will attempt a different strategy. In either case, like inspiration, players should role-play and describe what happened: slipped on bloody ground, the foe surprised the character with a headbutt, wrestled with the weapon before regaining control, or did a minion get in the way of the arrow (the player discards inspiration to kill the minion during a missed attack against the villain)?

Earlier, we mentioned one use for inspiration, but it can speed up combat in a much more interesting way than dispatching a minion. In Iconic, other players can aid fellow adventurers during an attack in between turns. This allows for a more dramatic, realistic encounter – where actions seem simultaneous.

This last method is simple, without game-breaking effects. When a character misses an attack, another player can spend inspiration to add a d6 roll to the attack as a reaction. Players must describe how their characters aid in that attack (offer inspiring words, shoot an arrow, serve as a distraction, etc.).

Hopefully, a few of these ideas can shorten the length of your skirmishes or, in the least, spark a few homebrew ideas to make 5th Edition combat bold and more dramatic. Now go unleash your skeletal hordes, misaligned henchmen, and brutish ogre minions next session, and if interested, check out our Kickstarter Campaign for the Iconic Adventuring System.

Joshua Raynack is Lead Game Designer and co-founder of Alea Publishing Group. As an avid gamer in the role-playing genre for over 35 years, it led to designing innovative rules for 3rd, 4th, and 5th edition Dungeon and Dragons, including Blood Magic and the Feudal Lords Campaign Setting.

Combat-hacking: How to Make Your 5th Edition Combat Iconic 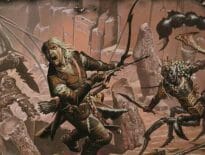