Year Zero World Building creates campaign settings using Free League’s RPGs. This month delves into the dying by murder world of Mörk Borg, Artpunk RPG (PDF only). How to kick off a campaign and how to build your version of this cursed setting.

Thanks to Free League for sending me the newest Mörk Borg products to help write this article. Mörk Borg from Free League, without third party products, consists of a hardcover digest-sized rulebook, two softcover supplements (Heretic and Feretory), a GM Screen with two sheets, two poster maps, and two pamphlets (one with five character sheets).

Feretory (I had to look up what the word meant)

Start with the GM Screen. Unfold five panels of art only, no words. Black, gold, red, and white. Vivid colors. Basilisk, headless angel, witch, lost ruins, and brooding keeps will face the players. The GM will have access to the standard, vivid yellow phrases of short GM advice mixed in, with charts of weapons and gear, NPC information, rules, and power (like spells) descriptions. The two double-sided sheets include tables on somewhere to drink, traps, forty city events, and the tablets of ochre obscurity.

All of this is intriguing. For a look at the world, open the poster map. In vivid yellow and darkest black, you see the city of Grift and the bridges crossing over to the large island itself. Graven-Tosk, Galgenbeck, the Valley of the Unfortunate Undead all beg to be explored at your peril. The other poster map has a winged demon without a face on one side.

On the other side is a comic panel underground crawl. Three adventurers enter the Hexed Gauntlet of Kagel-Secht, an obituary dungeon. One adventurer has a clawed hand and small wings. Another has no legs and rides the back of the third. All perish, two at the hands of each other when one succumbs to the murder-rage of the Hexed Gauntlet, he claimed. Stats are provided for traps, monsters, and magic items.

Now you’re ready. Twin two-headed basilisks crawled into the world, and prophecies were spewed. When finally Psalm VII the Last is read, the game ends.

Until then, the players run characters through a sunless dying world. Perhaps a gravedigger with moldy silver stolen from the dead. A heretical priest hunted by the Two-Headed Basilisks of the One True Faith. Or a gutter born scum who avoids chump-work by wielding a razor blade on a moonless night.

If you’re going to play, you’re going to need a character. With the rulebooks, you have three options. The default is random gear and abilities, nothing special beyond what you do in the world. You can also roll a random class like the fanged deserter or wretched royalty. Feretory (F) has four new classes, and Heretic (H) has two (the songbird’s soul is screaming, but throat and purse are sweet; made a deal to gain an instrument like the damage-dealing hurty-gurdy). Here’s a table if you want them all on a rollable table:

A third option, found in Heretic, is that characters without a class can gain random feats. A narrative achievement or random roll might grant Bloodied Knuckles which allows for unarmed damage and armor bypassing but on a fumble, your hand breaks. Or Bone Crafter to make equipment out of the bones of corpses.

GMs need support too. The other pamphlet has a dungeon on the back and wilderness travel rules inside. The core rulebook provides the world, monsters, a starting dungeon, many random tables, and the psalms of the Calendar of Nechrubel which portend when the world ends in fire and darkness. Feretory has more random tables, a dungeon, wilderness rules, locations, items of doom, and more.

Heretic introduces new options as well. Creating cults. A graveyard. Bloat, the gluttonous dungeon and a swamp witch adventure. Blackpowder weapons. Curses and how to get rid of them (my favorite explains to swim alone in a dark lake and ends with: But whatever you do, do no—page cuts off). A mysterious peddler. Wishes. And a couple of monsters.

You end up with a death metal world of dying doom and blood and violence. PCs will live cruel lives and strive in vain to win the day. But what fun they will have spreading mayhem and destruction before sword or sickness or the end of days lays them low.

As a GM, maybe I’ll start with a cult that likes black-powder weapons. They are the Temple of Burned Bones, led by a lip-sewn executor broke and wasting and lairing in a Graven-Tosk murder-maze mausoleum. Each cultist uses the stats for prowler and fights until they run out of ammo or the party kills them. Their weapons are worth a lot and are powerful. Does the party sell them and maybe see them wind up in the hands of enemies? Do they hold onto them but have prowlers hunting them and royalty hounding them for their handheld death-dealing riches?

Turns out the Temple of Burned Bones had a beef with The Strange Serpent Drug Cult. Notes say the cult is hanging out in an ancient tomb in the Slithering Swamp on page 46, and they guard an altar that grants wishes.

You can see how this process will snowball. All players also decide how often the Nameless Scriptures from the Calendar of Nechrubel are likely to get invoked. Some are really bad like the trees withering and dying or lakes and brooks blackening like tar. The world starts to die as the game rolls on.

I think I’d kick off the end with Psalm III, 3:1 At Graven-Tosk the soil shall grow warm and those who rest be made to walk. Then go right to the adventure Graves Left Wanting. The PCs awaken in the Plague Pit in coffins under suffocating earth. Don’t just pull the bandage off; take the scab too, and maybe a bit of pink new skin and some blood.

If I get pressed for time, I can use the room generator in Dark Fort, the game that inspired Mörk Borg which is in the other pamphlet. A simple dungeon crawl can still help spur ideas.

Mörk Borg has everything a GM needs. Murder, avarice, despair, horror, cursed treasure, and PCs dying to seek glory and fame and die trying. The whole collection hums with fecund ideas and pulses with unholy possibilities. See if your sacrilegious songbird can face The Strange Serpent Drug Cult and come out the winner before the sun goes dark and everything and everyone ends in fire. Your campaign ends here. 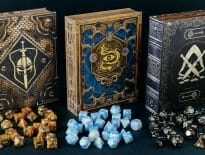