Pocket Odyssey was a Kickstarter back in 2014. The last update on the campaign, which was successful, is a private one dated 2018.

Backers got their game, the world’s first micro-RPG, and now a revised and updated version is on the way. Outland Entertainment has acquired the rights and the current versions are now available from their store.

In Pocket Odyssey players assume the roles of legendary heroes embarking on epic quests, defeating monsters, finding loot and pretty much anything the players mind can imagine.

One of the players is chosen at the beginning of the game to be “the storyteller” and will use innovative quest-building cards to quickly create a quest. Each of the other players create a hero and how that hero interacts in the storytellers world.

While it bills itself as an RPG, it’s very close to a board game and some might say it acts as a bridge between the two.

Here’s a snippet from the Kickstarter;

The main way to create characters in Pocket Odyssey is for each player to randomly draw 2 background cards, 3 skills and a flaw. The background cards determine what your character is good at, for example “the Ogre Slayer” is a master at athletics, can withstand pretty much anything tough (like extreme weather or poison gas), and can even intimidate almost anything. The “Aelfen Blood” on the other hand knows everything there is to know about nature, has animal like senses and has the stealth of a ninja. 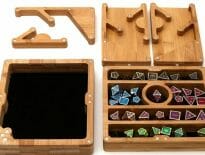 Geek Stuff This wood dice vault, tray and tower folds away to… 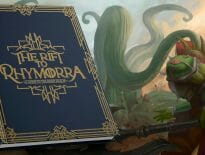