What is it about D&D?

Every time I am forming a new RPG group, I give the players three potential game options to pick from. Time and time again, people who have said they want to be more adventurous and try something new still pick the D&D option.

It’s not only players. I’ve seen people try to run a Star Wars based game off of D&D rules despite the fact that three RPG versions of that franchise already exist. And each of those games is better at making Star Wars than the current D&D ruleset.

I’ve finally come to the conclusion that I’m going to stop offering D&D to some groups. I’m gonna get a more solid idea of the genre they want to play and offer stuff within that field. Because as much as I love the old Winged Lizards & Subterranean Labyrinths, I know that every time people are persuaded to try a new game, they find something they love about it. Be it the freedom of a more rules-light engine, the setting, a particular mechanic or feel, there’s so much out there to be sampled.

As of this writing, there are roughly 617 different published RPGs that I know of in existence, not even accounting for different settings within the same game line.

That’s a lot of choice. If you’re only playing one of them, that’s OK, but it eventually might not be giving you all you need.

I get it; that’s a lot of games to choose from. And even if you get one you like, how are you going to persuade others to play it? I see this a lot; DM’s wanting to try a new game and not being able to convince their group to give it a try. I don’t think it’s that people genuinely don’t want to try new things but instead that they often don’t see that a new system can offer something they want, even if it does. Let’s look at how we can get a group to look into a new game.

When a player complains about game mechanics or wants you to find a solution in game or mentions they were reading about a game that does something different, keep note of it. Try to find a game that solves the problem, do a little research, maybe even borrow the mechanic for your game.

But also, then you later have that mechanic as a selling point. ‘Hey, you remember how you said you hate how hit points really bring you out the RP experience? Well in Runequest, you have hit locations and strike different parts of a foe, making damage really tactical.’ is a persuasive argument for someone frustrated by a ruleset.

I once lined up a load of campaign options for a player group, and I wrote them with a real itch to play in a wasteland of sorts and half of the options reflected that. Then a majority of the group said ‘I don’t like post-apocalypse stuff’ so I ended up running the one game that wasn’t set in the waste.

I learned that day that you need to know what your group is into. Get to know their favourite genres and types of games they’d like to play. Do they like games to be pulp romps or fights for survival? Does one player really hate horror? Is someone itching to be a space pirate?

Once you actually canvas your group, it might be that you can persuade a few of them based on their stated desires. Two of the game I am running professionally right now are not because I offered them but because a player asked if I would be prepared to run that specific game.

As you can see above, the trick is about seeing what the group wants to run.

There’s no point in squeezing the wrong group into a game they don’t like. It’s better to pay attention to what the group like and find games you like in that bracket, rather than get excited about the new hotness and then force them to play it.

I know this sounds galling but take it from someone who played four sessions of Deadlands and then waited two decades to run it again – you will eventually find the group who love a game you love. But it might not be your current one. And that’s OK.

I am going to be frank for a moment. If you’ve tried lots of systems and your players seem to be slowing down on their want to join you in a new system, it might be because you keep jumping to the newest game on the block.

A lot of GMs do this, dropping whole campaigns and ideas for the newest thing.

Players find it hard to invest because they know the new thing will come along to replace it. You need to invest in the new thing and stay the course. Because then players will trust that trying the new thing is going to be worth their time. I had a friend who quit a game because the DM changed the system they played the campaign in four times – D&D, then Pathfinder, then 13th Age and then a World Of Darkness style homebrew. The player just got fed up. Pick a lane and stick with it.

Explain The Lack Of Sunk Cost

You need to not expect players to buy anything. At least not at first. It can be a lot to buy a rulebook, read all the world lore and such. You need to make the entry to game as small as possible.

When I offer a game of Werewolf: The Apocalypse to a set of players, I say something like ‘you are the good werewolves who secretly fight corruption in a morally bankrupt world’, and that’s it until people have agreed and I can give them a handout in session zero. I’m not going to explain the spiritual nature of the Garou, how the darkness came to be, tribal types, other changing breeds, social dynamics, lost tribes and such. They need enough to get to the table, and it needs to cost very little, both financially and mentally.

Next time, I’m going to try and help you choose a new game you might want to try.

Sites OpenD6net aim for a new physical book after websit… 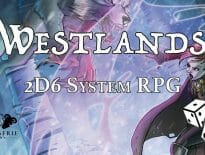