You are here: Home / Games / Tabletop & RPGs / Dexterity and accessibility: The comedy RPG One More Quest has you fling dice

The Horrible Guild has an excellent track record, and Dungeon Fighter is already an established and popular board game. It’s all looking good for One More Quest, the tabletop RPG based on Dungeon Fighter.

In fact, One More Quest asked for €10,000 even though the campaign is running for fewer days than usual, and such is the draw of the idea and people involved it already has more than €60,000 pledged.

Why worry? Allow me to overthink things for you. The idea with One More Quest is that you throw dice, aiming to get near to a target, rather than merely roll them. What, though, if party game stunts are beyond you physically? Good news, as briefly mentioned in the story, you can adapt the game with accessibility in mind. You can check out more details from the project page.

My worry is born from bias. I’ve horrible arthritis. I’m okay today and this month so far, but there have been times when trying to accurately toss dice would seriously have been painfully beyond me.

Last year, Geek Native had a preview of the dice flinging RPG, and I asked about accessibility then. The party trick elements, such as spinning around before tossing the dice, are optional, and adaptations can be made.

That preview has been yoinked now, removed at the request of the Horrible Guild. Such removals are frustrations but there is a second preview, also free as a replacement. You’ll get some reassurance from that.

99.99% of gamers won’t need to worry and can get on with the good stuff. Indeed, One More Quest does look good. I like the humour; villains are slum lords or shareholder sorcerers, and minions are teenage Black Knights or Manotaurs.

One More Quest is a dexterity-based, comedy roleplaying game of dungeon-crawling adventures set in the world of the Dungeon Fighter board game, where the success or failure of your actions is determined by throwing dice at a Target board, trying to get as close to the center as possible.

Backers who support the project with at least €22 (about £19) get access to the digital version of the game, which includes The Adventures Mistape scenario and the exclusive to Kickstarter “Battle of the Bards” one too, plus all digital stretch goals.

If you miss the early bird tier, it’s €55 to get the Starter Set, which means a physical rule book, target board, 6 Eyecon dice, the box, the physical copy of Battle of the Bards and the digital stuff.

The Collector’s Edition is handed out to backers who offer €95 or more if you miss the early bird tier.

The highest tier is €145, though, and shipping is still to be worked out.

The estimated delivery is more than a year away but feels sensible given the physical components required and is currently slated for March 2023.

Dexterity and accessibility: The comedy RPG One More Quest has you fling dice 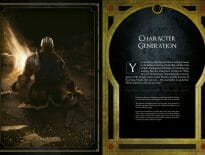