In August, Highmoon Press gave away all their print products and confirmed to Geek Native that all PDF products would be deleted after one final sale.

There’s been a change of plan. Now, eight Highmoon Press products can be found on the new Lightspress Media DriveThruRPG page.

Lightspress is the new name for Dancing Lights Press.

Specifically, the eight products are:

The news gets even better in that it looks like Daniel M. Perez of Highmoon isn’t getting out of the business entirely. In a post, Daniel says;

In addition, any future titles created by Highmoon Press (and please know, there will be future titles!) will be distributed by Lightspress Media.

In 2016 and in Finland, Dancing Light Press described itself as a lo-fi tabletop roleplaying publisher.

In June this year, the company moved from Jyväskylä to Wilmington, Delaware, in the United States. This puts the publisher in the same country as most of its customers, enabling physical books to be added to the roster.

In December, the company finished rebranding from Dancing Light to Lightspress.

It’s all about the minimalist touch with Lightspress, who use words like “ostentatious” in describing other approaches. The rebranding statement says;

Lightspress Media is a tabletop roleplaying company with a lo-fi approach. Utility of content takes precedence over ostentatious production value. Graphic elements should enhance the message and not act as page filler and eye candy. Physical books need to be compact, portable, and sturdy. This minimalist aesthetic results in powerful toolkits that are both useful and affordable. After all, tabletop roleplaying isn’t the book. It is the creativity and collaboration that takes place around the tabletop. Our mission is to give you as much as you need, then get out of your way. 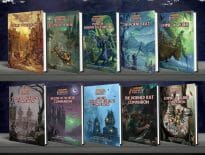 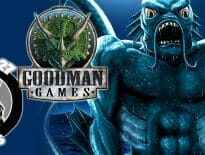 Tabletop & RPGs Goodman and Shinobi 27 Games come together for Ang…
wpDiscuzComment Author Info
Manage Cookie Consent
This site uses cookies 🍪, and links are ads that may earn bloggers some money 💰, and with this alert, I very much hope that these dark truths 🧌 are acknowledged.
Manage options Manage services Manage vendors Read more about these purposes
Preferences
{title} {title} {title}
Loading Comments...