Written by Alison Cybe, Shield Maidens is a Vikings/Cyberpunk TTRPG, and Mongoose Publishing will reveal more about it in the second quarter of 2022.

Cybe is an RPG designer with Fallout TTRPG and Vampire: The Masquerade Companion credits as well as the author of books like I Was A Gay Teenage Zombie.

Revealed in the annual report by Matthew Sprange, the owner of Mongoose Publishing, Shield Maidens was the first project mentioned for 2022.

In the game, characters join a group called, yes, the Shield Maidens. They’re tasked by Freya to prevent Ragnarok and resist the empire of Fenrir.

It’s about saving the universe. The Shield Maidens have scared Guardian Shields, an intensive training, but they’re tested by enemies across nine realms.

Mongoose shared some art assets which depict towns and cities from the nine realms and their Viking-meet-Cyberpunk vibe.

As for the gods? They’re nowhere to be seen.

Humanity has been forgotten, abandoned by the gods as they war amongst themselves.

Elves and humans clash over Ymir’s blood, ripping Midgard to the core to uncover ever greater resources. Dwarves have ascended, no longer troubled by the concerns of mortality, and even the dragons and Jötunn stand aside, caring little for the troubles faced by those in Midgard as humanity wilts under the oppression of a fascistic government. The time of the Shield Maidens has come, but even the strife in Midgard is miniscule compared to their greater task, renewing the cycle of time and ushering a new spring in the aftermath of Ragnarök. 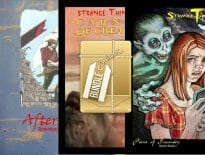 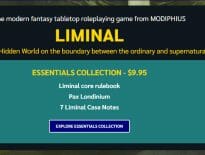 Tabletop & RPGs Modern horror RPG in a bundle: The hidden world of…
wpDiscuzComment Author Info
Manage Cookie Consent
This site uses cookies 🍪, and links are ads that may earn bloggers some money 💰, and with this alert, I very much hope that these dark truths 🧌 are acknowledged.
Manage options Manage services Manage vendors Read more about these purposes
Preferences
{title} {title} {title}
Loading Comments...