You are here: Home / Games / Tabletop & RPGs / Suburban Consumption of the Monstrous is an adult game of playing with your food

It’s hard to believe that Suburban Consumption of the Monstrous is just the third Kickstarter tied to Pelgrane Press’ account, but it is.

Suburban Consumption of the Monstrous launched this week, and you can see progress or join in from the pitch page. The publisher has partnered up with Banana Chan and Sadia Bies for a horror LARP anthology. It’s food-based, or consumption-based depending on your definition, and it’s for adults.

Okay, it may only be the third campaign attached to the Pelgrane account, but the team has way more experience than that. Cat Tobin, Pelgrane’s MD, has done Hillfolk, TimeWatch, The Dracula Dossier and The Yellow King.

Others in the team, from the art coordinated by Ruby Lavin to Ratworm Games’ Sadia Bies and the respected Banana Chan, also have plenty of experience. Chan’s most recent credit may be on Jiangshi: Blood in the Banquet Hall, and so they may even have a bit of a theme going on here. A speciality.

If you’re not certain, not after the pitch video and Kickstarter nudge, there’s a free to download play kit for Suburban Consumption of the Monstrous on Itch which gives you an up, close and personal look at the LARPs.

It’s also worth, I think, noting that this collection includes Solo LARPs, and that’s an exciting proposition.

Within the creaking bones of this old home, you sit in awkward silence with faces you’d rather not speak at around a lavish table. You puppeteer your words and motions with cautious care, ensuring you don’t step out of line or startle any of the other guests. You play along until the bell rings. Dinner awaits.

I’ll look at some of the main pledge tiers here, but it’s worth noting that, for now, there are many of these available at lower price points for people struggling with money but limited and selling.

It’s a pledge of £15 to get Suburban Consumption of the Monstrous in PDF. At £30, you get an upgradeable physical book, a digital dinner invitation, a PDF and have shipping to pay later.

There are higher tiers; £75 adds in a poison vial, signed art, bookmark and an enamel pin, £185 has more art and cutlery added and by the time you’re at £750, you have got an annotated version of the book and even a haunted house (albeit a small one) in your rewards.

Digital delivery is slated for August 2022, with the physical tiers later and in December 2022. 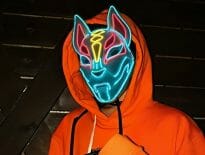