Warhammer World Building creates campaign settings using Cubicle 7’s Warhammer RPGs: Soulbound (PDF only), Warhammer Fantasy Roleplay (PDF), and Wrath & Glory (PDF only). Each RPG features player characters exploring a world of magic and monsters that is threatened by the forces of Chaos. This month continues a three-part (grown from two originally) exploration of the Empire of the Old World for WFRP.

Two months ago was a look at Archives of the Empire Volume I (PDF only). Last month was a comprehensive look at Middenheim: City of the White Wolf (PDF only). This month covers an adventure and adventure support in Middenheim in Power Behind the Throne (PDF only) and its Companion (PDF only). My thanks to Cubicle 7 for providing physical copies of these books to help in my continuing exploration of everything Warhammer RPG related. As with all the Warhammer books, these books are high quality and full color with endpapers depicting maps of Middenheim, one for the GM and the other for players.

If you want to run a campaign focused in Middenheim, the Templar’s Arms is a decent inn that PCs could use as a home base. It comes complete with maps and details on the staff. Also, Golthog is an ogre mercenary who stays at the inn and could serve as a hireling or even a replacement PC (using rules for ogres that will appear in Archives of the Empire Volume II).

The Companion has two additional adventures that GMs can use to create more challenges for the PCs in Middenheim. One deals with Skaven and the other with a necromancer. While these foes are dangerous (and the Skaven become the main enemy in the next adventure), the biggest current threat is the Purple Hand.

Whether a GM wants to run Power as the next step in the Enemy Within campaign or as a kickoff to adventures in Middenheim, the obvious foe is the Purple Hand and the PCs’ introduction to Middenheim set against the background of the Carnival. Juxtaposed against the gritty street-level Carnival is the PCs’ attempt to get to know the movers and shakers of the city.

The Purple Hand is the big threat to the city of Middenheim. Their infiltration and manipulation may well bring down the city and invite a Skaven invasion. PCs may be in the city to deliver a letter and crate to Captain Sharlach. This can be the set-up to a new campaign or continue on from Death on the Reik. This delivery leads into an ambush by the Purple Hand as the PCs stumble onto their first conspiracy and web of lies.

After this kickoff, the PCs can wander Middenheim following up on leads they find and experience the Carnival. The Carnival is full of diversions and challenges for the PCs to face. In the crowds, PCs can try their hand at various skills like busking, hawking wares and preaching. Various encounters may lead to chases or PCs needing to shadow someone through a crowd. PCs may also bump up against thugs shaking people down for money and young pickpockets.

PCs can face more dangerous challenges like fighting a minotaur in Bernabau Stadium. Middenball is also being played with large bets being placed. If the PCs are themselves on a team (as discussed last month), they may get to actually play during the Carnival. There is also an archery competition PCs can join.

Carnival events are larger affairs that will have major NPCs attending (summarized on handout cards). If PCs are looking for a certain NPC, the GM will know if that person is attending something during the Carnival. Chapter 6 of the adventure goes over various events the main NPCs are involved in and may experience the PCs. In addition, there is a two-page flowchart of all the major NPCs and how they interconnect. And for GMs who want even more interactions and NPCs, the Companion has additional details and a few more NPCs.

These interactions and events eventually lead to Chapter 7 as the PCs trace Brunhilde Klaglich, agent of the traitor Wasmeier, to her lair. This, in turn, will lead to the final showdown with the traitor and a hopeful defeat of the Purple Hand. These two chapters are packed with maps and NPCs, so as the PCs close in on defeating the Purple Hand, they will have plenty of adventure and options to finish the cult.

Part of the Purple Hand’s manipulation prompts a religious war between followers of Ulric and those of Sigmar. This may mean the PCs are challenged if the followers of Ulric offer an alliance. On the one hand, the PCs can use all the allies and assistance they can find. On the other, this may alienate any followers of Sigmar the PCs know and perhaps even lead to outright hostility. Especially if the Ulric allies believe that Sigmar is mortal and not divine (the Sigmarian Heresy or the controversy depending on the point of view). The politics here are interesting, and there will be no simple answer for PCs to find.

PCs may find an even more unusual ally in the Jade Sceptre, followers of Slaanesh. Although Chaos cultists would normally be the PCs mortal enemies, the Jade Sceptre is opposed to the Purple Hand’s desire to bring complete ruin to the city of Middenheim. The Slaanesh cultists want some sort of society to hide within and use to enjoy their debauched worship. So, their desire to stop the Purple Hand may coincide with the PCs’ goals for a small bit of time. Daring (or foolish depending on how the alliance turns out) PCs may create a temporary alliance with the Jade Sceptre knowing full well that at some time in the near future, the Jade Sceptre will betray them. And maybe clever PCs will do the betraying first.

The Enemy Within has been one successful adventure after another, and Power Behind the Throne is no exception. Coupled with Middenheim and the upcoming The Horned Rat, Power Behind the Throne sets up an entire mini-campaign in the city, whether a GM runs the entire Enemy Within campaign or just this part of the series. So much of what makes Warhammer unique is included such as competing NPCs, Chaos cults, grimy urban centers, religious friction, and ongoing corruption and betrayal beneath all the dirt and blood. So much to see and do in Middenheim if you can avoid getting killed by the Chaos cults and ratmen. 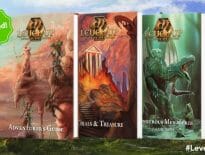 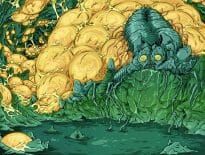