You are here: Home / TV / Hawkeye and Hawkeye in the Hawkeye trailer

Disney+ is currently running “What if…” but soon, November 24th, we’ll get one of their “What next…” titles as the new Hawkeye meets Hawkeye.

Previously, Jeremy Renner has talked about the new character played by Hailee Steinfeld.

[Kate is] a 22-year-old kid and she’s a big Hawkeye fan. She has a wonderfully annoying and equally charming manner about her, because she’s such a fangirl of Hawkeye. The relationship grows from that, but the biggest problem for Clint is Kate Bishop and the onslaught of problems that she brings into his life.

Former Avenger Clint Barton has a seemingly simple mission: get back to his family for Christmas. Possible? Maybe with the help of Kate Bishop, a 22-year-old archer with dreams of becoming a Super Hero. The two are forced to work together when a presence from Barton’s past threatens to derail far more than the festive spirit.”

Hawkeye and Hawkeye in the Hawkeye trailer 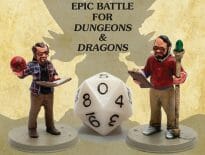