Clawhammer Games are asking for $16,000 from the Kickstarter community to fund a gilded age tabletop RPG about mortality, growth and the Louisiana bayou.

There’s a free quickstart available already, with some illustrations but mainly text-based and a look at the game’s unique magic system. Despite that generous deal, or because of it, the Kickstarter is off to a good start with over $7,500 pledged in the opening days. You can see the latest total or join in from the pitch page.

The game uses a d12 system with a focus on character relationships. Characters are outsiders, people from outside Scarstone town, a rural outpost warped by an event known as the Convulsion.

Once, Scarstone was surrounded by similar towns. The Bayou once had an end. Now, unknowable numbers of horrors seep through the uncharted backwaters, strange magic contorts reality to its whims, and the settlements that called Scarstone their neighbor jut half-ruined from the mire like bones from a wound. Times have changed.

In Gravemire, players aside skill points to build characters in a freeform way, inventing skills, taking fears and weaknesses at the start of the game to get more points and to tie their PC into the plot.

Gameplay is split in two. Characters being either beyond the Border or within it and the relative safety of Scarstone. Beyond the Border, characters are focused on survival and completing their Contract, which means keeping Health and Willpower going. In the down, Downtime is a chance to learn more valuable skills.

The final book will be about 150 A5 pages, 20+ full illustrations and a labour of dark love.

If you miss the early bird, a pledge of $25 will get you a PDF copy. You can go higher, making that $30, which offers a second PDF to the community.

A paperback, excluding shipping and an early bird deal, is at $45 and a deluxe hardcover at $65.

Other tiers exist, but they’re all tagged with February 2022 as the estimated delivery date. 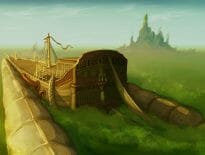 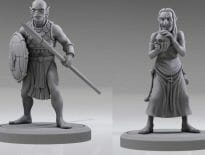