We know that John Wick scribe Derek Kolstad has been employed to create and pitch a D&D TV series, and he’s hinted at Underdark and that it’ll avoid past events. We also know that Hasbro is pushing for more than one TV show to create a D&D brand universe. Marvel can tell you how well that works.

Now we know that Andrew Cosby, the co-creator of the TV series Eureka and the co-founder of Boom! Studios, who are making waves in comic book publishing, is writing a D&D TV show. Cosby left Boom! in 2010.

At a San Diego Comic-Con panel, he said;

I’ve designed the series to basically be a campaign. I got to sit down as an adult professional and design a Dungeons & Dragons campaign that I’m being paid to do that will ultimately have hundreds of people working on it.”

There’s an amazing team at eOne that Hasbro has put in charge of the film and the television show. The people I’ve been working with get Dungeons & Dragons at a level that is difficult to believe. It feels like being at a D&D table. It’s a bunch of creative people sitting in a room and saying, ‘What if we did this? What if we did that?'”

We don’t know whether Andrew Cosby is working on the Derek Kolstad vision or other D&D TV shows.

Eagle-eyed fans will have known for a month at Cosby was involved in a D&D TV show. He said so on Twitter. No doubt this will change, but that tweet has zero retweets, no comments, and six likes at the time of writing.

However, the tweet hints strongly at indulgence and cheap sin. It includes a screengrab that reads;

I’ve never been to Las Vegas but I love it in concept because it sounds so made up. Imagine if you were reading a fantasy novel and they were like “smack in the middle of a deadly inhospitable desert there is a glittering city of indulgence and lawlessness and cheap sin that has specifically engineered itself to obfuscate your sense of time and keep you there as long as possible while they take all your valuables.”

That, according to Cosby, is almost precisely the live-action Dungeons & Dragons series he’s working on. 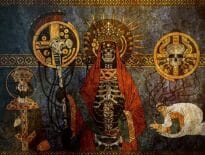 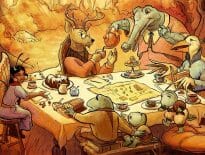