Rod Waibel, who talked to Geek Native about OSR, has launched Chromatic Dungeons.

The RPG is a clone of early era TSR Games (aka TSR Games (1)) and yet designed to represent gamers today. We’re a diverse, motley and fantastic group. Izegrim, Rod’s company, needs $8,000 to fund the project which you can join on Kickstarter.

As OSR fans might argue, there’s a concept of “rulings, not rules”, and therefore the feel of an old school game isn’t tied to the game mechanics era. That’s the basis of one key concept in Chromatic Dungeons. The second is that games are better when created by the best talent possible, and that means a diverse team of people with varied life experiences, points of view and skills.

Humanoids in Chromatic Dungeons don’t have a defeat alignment, and there are only three; lawful, neutral and chaotic, which are influenced by cosmic forces.

Ability scores are based on race/ancestry but not exclusively so.

And yet, you’ll be able to take old modules from the 70s and, with a few tweaks, use Chromatic Dungeons to play through them.

Now, there is a problem. The goal of Chromatic Dungeons is to clone old TSR Games, and since then, a new TSR Games (3) has come along and spent some time making threats against OSR communities. Rod has this to say;

Note: I wrote this preview in late May. Since then, there has been a pretty large garbage fire regarding TSR3 revival, the people involved, and their anti-inclusionary rhetoric and attacks. So the timing of this seems…appropriate. As a fan of the OSR, I believe the OSR can be inclusive and welcoming, as it should be. I do not endorse or support the comments made by this new TSR group, and will do what I can to counter their message.

A digital copy of the Chromatic Dungeons rule book is a reward for anyone backing the project at $10.

The hard copy of the 330-paged book, minus shipping costs, is added to the digital reward along with four digital zines at $30.

A pledge tier of $150 is the next jump up, which cuts out DriveThruRPG’s fulfilment process and restricts backers to the USA only. That includes the PDF of the core rule and the hardback and the zines The Gnoll Sage issues 1 through to 4, Basic Monsters and Treasure Book, Basic Rulebook and Compact Heroes.

That top tier is expected to fulfil in October this year; the others are due in August. 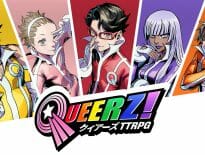