In the style of 80s “turn to page XX” adventure books, the Choose Cthulhu stories adapt Lovecraft stories into choose your own path encounters.

We want to revive the 80s feeling in every aspect; our books are intended for the adults who enjoyed original gamebooks during their youth and for the new generations that missed the incredible feeling of interactive reading. [Our] gamebooks for mature readers have an excellent narrative style, even using many passages from the original H.P Lovecraft masterworks.”

There are 15 gamebooks in the collection currently and in two different formats; vintage and deluxe. They’re available in Spanish, but also in English. As the Choose Cthulhu site says, like the Necronomicon… these books can’t be bought at regular stores.

Steve Jackson Games may well change that, but they’ve not released any more information on their plans except to say that those plans will be announced later.

In the meantime, the webstore is where books, t-shirts, bookends and even a straitjacket can be bought! 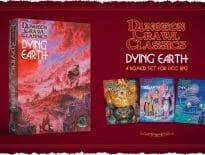