You are here: Home / Games / Tabletop & RPGs / Die by d100 and the bronze sword: A review of the Jackals fantasy RPG

Jackals is a tabletop RPG from Osprey Games that arrived on my desk at the perfect time.

I’d just finished listening to the audiobook of Wilbur Smith’s River God, which is set in bronze age Egypt and at a time when a new bow design can change the course of a war. Imagine, then, what might happen if something more robust than a bronze blade was developed? I was ready for some bronze age action.

Jackals is a bronze age fantasy, and it’s a gritty high fantasy at that. It’s sorcery and sandals in the style of the Epic of Gilgamesh, and it gets the thumbs up from this ancient one.

Designed by John-Matthew DeFoggie, the RPG is set in a land reclaimed by humanity from monstrous overlords, a force known as Takan.

The characters are Jackals, a title and responsibility given to those who protect communities from harm and take action against the Takan, which still lurks near the edges of the rescued land. PCs start off weak but become legendary heroes.

Jackals uses a d100 system, and while that sounds retro, I found Jackals to be fairly contemporary. If you’re new to the hobby, then starting here rather than, say, RuneQuest might make more sense.

The approach is straightforward; roll less than your skill on the percentage dice. If you roll doubles (like 88 or 55), you might score a critical or fumble.

In another simple but effective touch, the system gives you lots of reasons to push your skill level beyond 100. That’s where you can start pulling off some awe-inspiring moves, taking your character from gritty survivor to someone worthy of song.

You’ll spot the trend if I use synonyms for “straightforward” and “it just works”, but they do apply here. Jackals has a morale system baked into it as well, and it’s a prominent part of combat. If your character doesn’t have the will to fight anymore, they won’t. Even more importantly, if the ambushing bandits no longer the desire to fight, they won’t either.

In a move that more RPGs should steal, Jackals has rules for travel as an essential part of the system.

Your experience with Jackals will likely begin with character generation. That’s a process that shows how a single choice can result in very different directions.

Magic is genuine in Jackals, and if your character is a Ritualist, they know better magic, but that decision shapes how many other options they have elsewhere.

The chargen system needs one read through, just like the rules, and then as you should have it. Jackals is easy to pick up.

The world of Jackals

I’m no scholar, but Jackals feels historical to me. I don’t mean to suggest that there was once magic in the real-life near-East, but this RPG might be more accurately described as an alternative history with magic than a fantasy.

There are fantasy races in Jackals, especially as enemies and encounters. The story, though, is about humanity carving out hope for itself. The character options are around cultures, not races.

Characters can be one of four cultures;

Despite two of those cultures having cardinal points in their short descriptions, the RPG really does mean how someone was brought up and what they believe in rather than where they were born. If you want to play someone born in the South but who looks like and has the training of a Trauj, then you can go Trauj.

Your cultural selection really matters because it determines the rites you might have access to and the traits you can invoke.

The RPG begins with an introduction to the world, setting the scene and the background. Then, before the rulebook gets into running a game, it returns to the atlas describing the war road that divides the core setting.

At times, Jackals is impressive with its detail. John-Matthew DeFoggie even finds time and space to offer up a lunar calendar and name the constellations, for example.

While one part of the game is about humanity casting off oppressors and working hard as a community to build a better world together, another part is Corruption.

Also, in theme for Jackals is Law versus Chaos. The growing civilization represents Law, but some dark spirits and abominations represent Chaos on the edge of the known world in the wildlands.

Characters might find themselves taking actions that weaken Law, staining their soul and putting them at risk of Corruption. In the system, this is represented both by Corruption Effects but also by Dark Fate Points.

The most striking image in all of Jackals is the front cover. It shows what might be a Roman soldier but isn’t, marching through an archway with a grim face. The devil is in the detail. The characters flanking him are more diverse and a better representation of the scope of the game.

Once you crack open the hardback, there are illustrations when you’d expect them, but not an abundance. Chapters tend to have opening illustrations, but as the d100-lite RPG makes heavy use of tables, many pages neither suffer from walls of text that need to be broken up by pictures nor have space for them.

There are more images later on for the relatively short but effective bestiary. You get to see what Takan look like, and some of them are pretty scary. I’d much prefer to have had illustrations for every creature, but I don’t feel short-changed here.

It’s impossible to talk about Jackals without hailing the production quality of the book. The layout is spot on. The illustrations high quality and clearly benefit from veteran art direction. It’s a great book just to pick up and flick through. Pages feel smooth and robust.

If I had to travel to play Jackals, I’d feel no problem in putting the book in my bag and bringing it with me. I won’t do that with certain 5e hardbacks.

I had no expectations of Jackals, but now I’m strongly tempted to follow the series and even see what else Osprey is doing.

There’s an old school vibe to this RPG, which comes from character generation and the d100 system, but, as I said, it still feels contemporary. I think brand new gamers could not only pick this book up and learn to play without a mentor; I think they’d develop good habits too.

Jackals is worth a look. I think most people who spend any time between these A5 pages will enjoy their investment.

My copy of Jackals was provided for review by Osprey.

Die by d100 and the bronze sword: A review of the Jackals fantasy RPG 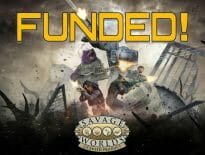 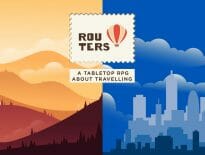