You are here: Home / Games / Tabletop & RPGs / The Scooby-Doo star selling luxury copies of D&D for hundreds of dollars

If you check out Matthew Lillard’s filmography on Wikipedia it’s impressive. Here’s there in Scream. Geeks will know him as Maniac from Wing Commander, but I’ll admit it’s the Scooby-Doo that comes to mind for me where he voices Shaggy (and has twice played the character in movies).

Lillard is also part of Beadle & Grimm’s, a publisher that takes books like the latest D&D hardback, Van Richten’s Guide to Ravenloft and turns them into luxury, detailed, envy-inducing, collectables.

The Silver Edition of Van Richten’s Guide to Ravenloft, as adapted by Beadle & Grimm’s, has just been announced.

You can buy a standard edition of the hardback for just over $40 from Amazon. There’s nothing standard about Beadle & Grimm’s, it’ll set you back $185.

What do you get for your money?

And that’s the silver edition. Beadle & Grimm’s have done gold and even platinum editions of books before. And legendary ones.

The other D&D 5e Ravenloft book is one such example. The Legendary Edition of Curse of Strahd is a cool $399 plus shipping from the bookmaker. 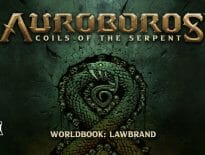