Before this blogger discovered that roleplaying games had already been invented and published he had created his own (well, of sorts… ahem) out of piles of dice and Star Wars figures. I’m backing this Kickstarter.

9th Level Games are going strong in Zine Quest on Kickstarter with Rebel Scum. It’s The anti-fascist space opera RPG done properly. They asked for $1,138 to fund and gave themselves a few days to do it. There’s more than $13,000 pledged now. The catch? Be quick; there are only a few days left to join in.

Rebel Scum will use 9th Level Games’ Polymorph system. Chris O’Neill is the designer, Adriel Wilson, the producer and Zane Graves is the illustrator.

Actual play fans can tune on Sundays to LevelUp_TTV Twitch to see some Rebel Scum take on the Nazis.

The politics is clear, right and unabashed. 9th Level say;

We are making REBEL SCUM as a way to re-discover the roots of the original message – how some scrappy, anti-fascist heroes can fight back against a government with unlimited power (including giant lasers and space magic). There is something refreshing and healing about getting to punch space nazis in their faces in a game, while we are living in a time when we have once again been called on to fight ACTUAL fascism in the real world (not just in our space operas).

The expected delivery for either tier is August of this year.

There are higher tiers, and if you’re eying other zine projects from 9th Level Games in Zine Quest, they are worth looking at. 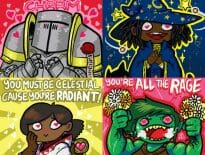 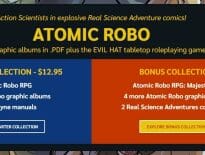