You are here: Home / Music / The iPhone Antenna Song by The Rock Cookie Bottom (@songadaymann)

What caught my attention straight away was that the song was sub-titled “Song a Day” and the Twitter address to follow is Songadaymann. It’s number #561. Has he been doing this for nearly two years? Has there really been a song a day for that long?

Even if you dislike the song – you should really admit that that’s impressive stuff. The production of the video alone looks like it’s taken a while.

Me? I quite like the song too. Good stuff.

Looking for the iPhone Antenna Song lyrics? Lyrics are always popular. Fear not; have them.

The iPhone Antenna Song by The Rock Cookie Bottom (@songadaymann) 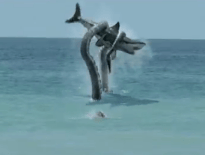