High-Rise Invasion is a horror anime, and it’s heading to Netflix. Here’s how they describe the show;

The unhinged and gory death-game manga High-Rise Invasion, created by Tsuina Miura (Ajin – Demi-Human) and Takahiro Ōba (Box!), finally gets an anime adaptation! High school student Yuri Honjo finds herself lost in an “abnormal space” where countless skyscrapers are connected by suspension bridges and “masked figures” mercilessly slaughter their confused and fleeing victims. To survive in this hellish world, she has two choices: kill the masked figures or be killed. Yuri is determined to survive in order to destroy this irrational world, but what will be her ultimate fate?

The show debuts in Japan on February the 25th and the English language posters also say Feb 2021, so we should expect it then. 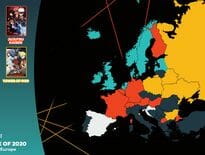 Anime Here are the world’s most popular anime by r…