You are here: Home / TV / Anime / Killing me/Killing you – did the anime trailer save the manga?

Killing me/Killing you is a manga from Imomushi Narita. The series is serialised in Kadokawa’s Young Dragon Age and has had three sperate volumes compiled of the run so far.

The problem? Last year, Narita was told that those volumes had not sold well enough, suggesting Killing me/Killing you wasn’t popular enough for inclusion in Young Dragon Age, and so, unless there was a turn-around, the series would be cancelled.

In response, Imomushi Narita animated an anime trailer herself. Here we are, a year later, the manga is still going, and the anime is getting closer.

The series is about a woman called Metea who becomes immortal after meteorites fall on Earth. Her travelling companion, an unlikely looking fellow, is called Euthanasia and also immortal.

They both want to die.

Narita’s story is about the adventures Metea and Euthanasia have as they travel the world looking for a cure to their immortality.

Killing me/Killing you – did the anime trailer save the manga? 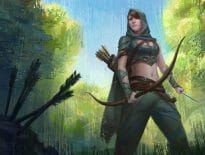