The Plymouth-based company has put together a “How to win” video for the game. Step one is having the game, and step two is becoming champion of your friends and family, after all.

Firstly, here’s the Kickstarter video for the game and then we’ll share the tactical tips.

The base game unlocks with a pledge of £27 on Kickstarter, but there are lower and higher tiers available. The base game and expansion edition is a popular choice.

Geek Native spoke to Ocean City Games and asked some introductory questions before we got into the winning tips.

For people who have not yet found the Kickstarter, what is “Salvage Hidden Treasures”?

Of course! Salvage Hidden Treasures is a competitive strategy game for 2-4 players. As a salvage ship captain you will be competing against others to claim the greatest haul of long lost treasure from beneath the waves.

It sounds straight-forward right? But you’ll need to carefully plan what you’ll keep, sell or trade based on the weight capacity of your ships. On top of that, a lot of the treasure you find will trigger game changing effects, from additional weight allowance and extra movement to potentially game-winning combo strategies.

We started Salvage Hidden Treasures as a design and illustration project inspired by our passion for board games and the inevitable influence of growing up by the sea. We quickly found ourselves playing the game over and over consistently building on what we had. What had started as a pure design project quickly turned into this amazing opportunity to work as a group of friends to make the game a reality.

Congrats on funding already. Kickstarter is hugely competitive on board games right now, and so you’ve done well. What do you think helped the game win backers?

It was really terrifying hitting the “launch” button on Kickstarter, we were speculating just before we did that we might end up with just our mums pledging to be nice to us. But to our astonishment we watched as the pledges came in over the first 24 hours, we were fully funded 28 hours, which was such a good feeling! This being our first project I think we were all a bit worried that nobody would like us at the party! The genuinely positive feedback and reviews definitely helped us during the Kickstarter campaign and helped a lot of backers make up their mind.

One of the things we’ve heard in messages from backers is that they’re impressed with the minimal and consistent style we’ve used. It’s something we definitely hoped would help us stand out, opting for simple, sleek typography with monochromatic block art designs. We wanted the game to work with the imagination of the players, that way YOU are the Salvage Ship captain, the ocean is whatever sea you can think of and the treasures hold whatever mystery you can dream up!

We also got quite carried away with developing cool little add-ons for our pledge rewards. One of the features of the game is the “Piece of Eight” treasure, which is an old pirate coin. So we found a way of having eight actual metal coins made with their own unique treasure chests. We’re then offering those eight as limited pledge options. You could be one of only eight people in the world with a Salvage Hidden Treasures Piece of Eight! I think these little extras have helped us stand out by offering something a bit out-of-the-ordinary!

You’re based in Plymouth and in Geek Native’s Kickstarter coverage, I’m seeing more and more promising studios in the UK launching exciting projects. Is this boom time? What’s driving it?

It’s absolutely boom time in the UK yes! There have always been tabletop gaming clubs in the UK but over the last few years it feels like the more that digital connectivity grows, the more we are all demanding richer, social experiences. As digital music took over, so too grew the interest in vinyl records. More recently the gin and craft beer industries are thriving, escape rooms are a go-to for parties and even better; we now have plenty of board game cafes! I think these things have definitely helped board games step into the mainstream here, which is great news for us!

We have a great community of publishers in the UK too and a growing number of expos (unfortunately not this year). Having that awesome network has made such a difference for us. And since launching we’ve had a few up and coming designers contact us, so have passed on whatever advice and help we can. Hopefully there’ll be more from the UK still!

As Salvage Hidden Treasures is currently available on Kickstarter and a lot of our backers will never have actually played the game. We thought we’d work with Geek Native to put together a deeper dive into some game-winning strategies! After all, if you’ve backed the game, we’re hoping you get to win the first time you play it. This will give you the upper-hand on your rivals!

As current reigning in-house champion of Salvage Hidden Treasures, Molly has kindly offered to share some (not all of course) of her top tips to win at your first game. Watch the video and read on…

As we point out in the video, getting hold of that second boat as early as you can in the game will give you a huge advantage over your friends. Each boat can only perform one “discover” or “salvage” action per turn. So with just one boat, you might find yourself exposing valuable treasure with no way of salvaging it for yourself until you’ve waited for your next turn to come around… and what if someone sneaks in and steals it from beneath you!? That would be a disaster.

Luckily – two boats means two actions. You can now utilise the famed “discover salvage combo” using one boats action to discover and then the next to salvage on the same turn! The possibility to strike gold (and hopefully something a little more valuable still) are open to you now on every turn.

Amidst the treasure tiles that make up the game are a variety of valued items. To win the game, you’re looking to hold the most valuable combination of treasure at the end of the game.

That said, a solid bit of advice is to always carry something a little less glamorous as you go. We recommend some “gold” as it’s plentiful and doesn’t take up too much of your weight capacity. Why? Well, in with those glorious treasures are some really mean and unfortunate twists of fate in the form of “event” tiles.

A lot of these will bring you fortune, but some might cost you an item of treasure… Or some other mean spirited salvage captain may use an event against you to try and steal what is yours. But you’re prepared – and that captain finds themselves with a little gold and none-the-richer.
You’ll thank us for that tip!

Tip 3. Don’t get too attached.

In the early stages of the game – we’re talking round 1 through 6 maybe – it can be really tempting to hold onto treasure and secure the early lead. Don’t fall into this trap! By selling some of those treasures early on, you’ll get that second boat a lot quicker and hopefully leave yourself enough cash to start to really build up an impressive haul of treasure!

So whilst your friends might gain a quick lead, they’ll soon be lost at sea with just the one boat, wondering how you managed to sail to success so quickly!

The Pieces of Eight are both a blessing and a curse. The way these unique treasures work is to increase in value the more you collect. One on its own is worth 300, but each Piece of Eight has its value multiplied by the number of Pieces of Eight you hold. So with two, you now have a total of 1200, all eight would net you a victorious 19,200!

So what’s our advice here? Don’t get too caught up chasing dreams of all those Pieces of Eight. The odds of finding all of these are pretty low. We’ve definitely seen friends and family driven to sea sickness in the pursuit of these rarest of coins!

The seas of Salvage Hidden Treasures hold a lot of treasure. Watching your opponents build a hearty collection of “Crash Landed Comets” or “Pieces of the Titanic” (both treasures in the game) can look intimidating – after all, they seem to have SO much treasure!? But put those fears aside.

As a cunning Salvage captain you’re adopting the Quality over Quantity tactic! Finding some low weight, high value treasure will steer you much closer to victory and give you the space to pick up a few last minute items in the end game. Some of our favourites for this strategy are “The Crew of the L’oiseau Blanc” and “Colonial Silver”. Keep an eye out for these and let your opponents build up a haul of rusty anchors.

What is a board game without a few really mean moments? Amidst the sea of treasure tiles we hear stories of a curious Flying Saucer, long lost to the depths of the ocean but with incredible powers.

If you are lucky enough to find this rarity, use its power wisely. This grants the ability to sacrifice the alien craft to steal any one treasure from any player (told you it was a bit mean!). Consider saving this for the last few moments of the game to swing the odds in your favour and crash your opponents hopes deeper than the depths of Davey Jones’ Locker…

Of course, in the world of Salvage Hidden Treasures, no tactic can be a given. Your friends have just as good a chance as you to land the Flying Saucer. If they do, our advice is to make your treasure as tempting as you can, trick them into using it as early as possible! Oh, and if you are lucky enough to come across this treasure and use it to your advantage, be a good sport and re-shuffle the tiles for the rematch while your friends wipe away their salty ocean tears of defeat!

We know that you’re going to love playing Salvage Hidden Treasures. The array of strategies, twists of fate and replayability were so important to us in designing it and we can’t wait to hear what strategies of their own that everyone invents when they get their copies at the end of our Kickstarter campaign! 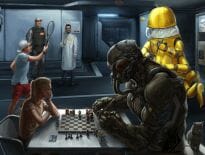