You are here: Home / TV / Online Shows / Friday the 13th: The attack of the RPG charity events

We’re facing a Friday the 13th this weekend. More importantly, we also have a host of RPG charity events to look forward.

Geek Native has picked three highlights to detail below, one which starts on the 11th, but if you’re ever in the mood for a geeky event, then check out the convention calendar for other suggestions.

11th November: The Reclimation of Phlan

An Adventurers League epic from RPG Research and SpoCon that begins at 9am PT.

With roots dating back to 1977, RPG Research is a non-profit research and human service charitable group that studies the effects of roleplaying games and their potential to make the world a better place.

A chance to go behind the curtains of a new episode of the Call of Cthulhu Mystery Program adventure recorded.

The audio fiction and RPG cast will be playing “The Crack’d and Crook’d Manse” from Chaosium and raising money for Transgender Law Center.

Get involved by subscribing to the Omniverse’s Twitch channel and making use of the Tiltify event.

The Game Academy is a group of educators and game masters that teach 21st-century skills through roleplay for children ages 8 to 18.

On the 14th, there will be a mini online convention with games, workshops and presentations. There will be a gala and an online auction. Celebrity GMs include the likes of Stefan Pokorny, Greg Vaughan, Ben McFarland, Stephen Radney-MacFarland, Tim Hitchcock, Jason Sonia, Matt “KC Rift” Everhart and Jesse Benner.

It costs $5 to take part, the money going to support the Academy and you can read up more at their site.

Wizards of the Coast are also running an auction for Extra Life straight from their eBay page.

Friday the 13th: The attack of the RPG charity events 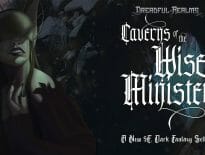 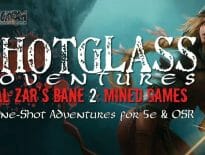 Tabletop & RPGs An exclusive look at Shotglass Adventures: Kal-Zar…
wpDiscuzComment Author Info
Manage Cookie Consent
This site uses cookies 🍪, and links are ads that may earn bloggers some money 💰, and with this alert, I very much hope that these dark truths 🧌 are acknowledged.
Manage options Manage services Manage vendors Read more about these purposes
Preferences
{title} {title} {title}
Loading Comments...