Call of Cthulhu offers the entire Earth as a setting in a variety of different time periods. I want to build my own Mythos world and slowly learn the secret history and details about a world haunted by monsters and the Mythos.

I don’t want to only play one-shots. Instead, I’d like to run long-term campaigns and see my players learn the secrets also as we play.

I have done a lot of research on Call of Cthulhu and decided eventually I’m going to want to run Pulp Cthulhu. For now, though, I want to learn the core system.

I ran some one-shots before I decided on the rules I want to use for a long-term campaign. I am starting to become convinced that a long-term Call of Cthulhu campaign is best supported by the slipcase set.

To this, I also added Doors to Darkness, which provides expert advice for Keeper beyond that in the core rules. It also adds five more scenarios and ten more investigators. That is nine adventures to run, and all the campaign background needed to do so.

It only makes sense to base the PCs out of Arkham. From there they can later venture into Lovecraft Country and eventually into the larger world.
To get organized, I want to sort the scenarios into where in the world they take place. And find an investigator group that can be based out of Arkham but have the ability to travel farther afield.

Amidst the Ancient Trees takes place in Vermont and introduces Gla’aki the Great Old One. Crimson Letters takes place in Arkham but is better suited to investigators with some experience. Blackwater Creek takes place in Massachusetts. Missed Dues is set in Arkham and is designed for PCs with criminal backgrounds.

Doors to Darkness opens up more options. The Darkness Beneath the Hill takes place in Rhode Island. Genius Loci is set in Massachusetts not far from Arkham. Servants of the Lake takes place near Kingsport and also involves Gla’aki the Great Old One. Ipswich, near Arkham, is the location for Ties that Bind. Arkham is the setting for None More Black and can be a great introduction to the city.

I know I want to use an investigator organization. I created the Liberty Agency for a Basic Roleplaying campaign set in 2025. I will use an earlier version of that organization from 1925.

In 1925 your expert detectives work to keep a post-war and divisive world from falling apart. Your agents have hidden pasts, and the future may be more strange then even their wide range of experience predicts. The Liberty Agency is listed as a consultant for the Society of for the Exploration of the Unexplained based out of Miskatonic University in Arkham. Still, even your detectives working freelance for the Agency don’t know everything about those running it and what unexpected events tomorrow may hold. The Agency at the detective level is a democracy, so the investigators vote to decide whether to take a case or not.

The PCs are, in fact, freelancers for the Liberty Agency. Who actually owns the Agency and helps out sometimes when things get tough is unknown at first. Another mystery the detectives may want to investigate.

The Liberty Agency fits perfectly into the adventures described above. While Missed Dues is written for criminal PCs, with some tweaks, it might work for detectives as well. One case can lead to another.

The Liberty Agency will be run from an old house in the Merchant District just north of Miskatonic University. The house sits on the Miskatonic River and has a boathouse with a boat. Usually, only the first floor is used. The basement, upstairs, and attic are rarely if ever visited.

While the Liberty Agency has had its fair share of detectives, former police and soldiers, and private investigators, it is also open to a wide variety of skilled individuals. Because the detectives are freelance, the Agency takes anyone with the right skills and backgrounds. If it doesn’t work out, the freelancer can simply be released from employment.

Armed thusly, the campaign is well on its way. A quick look at the rules to determine any optional ones to use and cleaning up anything confusing is all that is needed before the first scenario can be prepared.

I like the Experienced Investigators option from the Investigator Handbook. Having PCs start with war or policing experience make this a great option.

Character creation has various options for modifying the process of making characters. I don’t plan to use any of these until I get a feel for the system. I also don’t plan to use Spending Luck but will reserve it as something the PCs might unlock during the game as they make otherworldly discoveries.

The combat chapter has some additional optional rules that will help the game run more smoothly. Oddly, movement during combat is one option and certainly will be used. The optional rules for prone and poisons also seem vital. Other rules will be considered as the game unfolds, and they may be needed.

All of this prep sets up a campaign that will last for months. PCs will be part of a mysterious agency based out of a house full of secrets and investigating the unknown. Next month, a look at modifying the first scenario to work with the Liberty Agency. 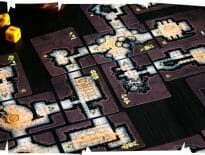