Call of Cthulhu (PDF) offers the entire Earth as a setting in a variety of different time periods. The American Old West is covered in Down Darker Trails (PDF included) (PDF only) from Chaosium, which presents not only a rich historical setting but also a supernatural one. Putting that together with the rules options in the book creates a unique Mythos setting of mesas and mi-gos that shouldn’t be missed.

The Mythos West includes two parts: setting and rules. Down Darker Trails is a supplement and requires Call of Cthulhu (PDF) to run. Rules come first and cover Old West investigators/heroes. Pulp Cthulhu (PDF included) (PDF only) is a welcome option, and options for using those rules are included throughout the book.

A quick word on the physical book. Chaosium kindly sent me a print copy of Down Darker Trails to help in writing this article. Like many of the Call of Cthulhu 7E hardcover books, this book is full-color, has a silk ribbon, and the layout and art really help the Keeper find information and become immersed in the Old West. Gone are the days of hunting through paragraphs for needed game information. At the same time, the book is filled with pages and pages of historical detail, crucial to running this type of campaign.

The book kicks off with creating investigators or heroes for the Mythos Old West. Equipment and weapons follow next. A large selection of guns is included, of course, along with mounts. I love the rules for the empty chamber, and the chance of accidental discharge for revolvers carried fully loaded. While the cowboy war bag isn’t covered until page 61, I really like details like that as well. The war bag was a canvas bag for storing possessions.

A missed opportunity here, however, is horses. While guns get plenty of detail, the horse basically comes as saddle or draft and in three qualities, and there are chase rules. A Keeper who wants details on horses can find inspiration at A Horse is a Horse: Breeds Common in the Old West – Petticoats & Pistols. Most PCs with a saddle horse will likely have a Quarter Horse, but other options include the Appaloosa, Mustang, Paint Horse, and more. I plan to develop rules for various horses, just as there are rules for various guns.

The Historical West is 70 pages plus with just a hint of the Mythos in it. The overwhelming amount of detail covers the historical Old West, including the history, setting, and people. It wraps up with NPC stats for both legendary Westerners and NPCs. This is gold for any GM, not just Keepers. You could run the Old West with no overt supernatural rules at all if you wanted to.

The rest of the book covers the supernatural West, including lost worlds, two towns, and two adventures. Taken together, all of these elements give a Keeper all the tools and details needed to build an Old West setting. Here is an example of doing just that.

Pawheton is a gold-rush town in the Dakota Territory surrounded by haunted wooded hills. The PCs are Pulp light heroes (one Talent, no psychic or weird science) who come into possession of a deed to a mine. Chinese heroes make sense, as historically, the Chinese were good at making mines profitable even if they heavily worked already (page 63), but any nationality would work.

PCs with occupations of miner obviously fit the campaign. Other useful occupations include doctor, scientist/engineer, scout/mountain man, soldier/warrior and maybe merchant (for selling the gold). Heroes can have Civil War experience per page 24.

The starting adventure Something from Down There is perfect for this campaign. Heroes who kill the monster and gain the deed could claim the mine, which kicks off the rest of the campaign.

Threats facing the PCs would include claim-jumpers, the conflict between two powerful named Pennebaker and Stratton, mi-go, sasquatches, and brutal winters. In addition, the Lost World of El Canon De Los Viejos can be accessed via a magical gate to the ancient past created by serpent people. The heroes might be lost in a blizzard and stumble into a dinosaur infested jungle and the war between Cro-Magnon man and Neanderthal. One of my favorite additions in Pulp Cthulhu was the t-rex and the velociraptor. This lost world has both, along with other dinosaurs. And likely some serpent people as well.

Of course, at some point, more monsters may rear their ugly heads. The Old West is haunted not just by the Mythos but also by mummies, werewolves, and vampires. The wendigo is another monster that may prowl the Dakota hills. Chapter 5 has an extensive list of monsters drawn from Call of Cthulhu (PDF) and the Malleus Monstrorum (PDF).

In addition to monsters, the supernatural effects of shamanic (folk) magic are fascinating. Folk magic includes spells like healing that are not normally part of Call of Cthulhu. While I understand the reluctance to include such spells, healing is not cure light wounds (from Dungeons & Dragons). It leaves horrible scars and is not permanent. I think in a Pulp light Western setting, this type of healing is fine. Other faiths might have versions of folk spells as well if the Keeper wants to expand the option with tailored lists. A preacher with the spell Cast out the Devil makes sense, for example.

Down Darker Trails has a realistic alcohol consumption optional rule. For a Pulp light campaign, however, the rules from Pulp Cthulhu are a better fit. The main difference is alcohol in Pulp can optionally help fight sanity loss.

Taken together, Down Darker Trails (PDF only) combined with Call of Cthulhu (PDF) and Pulp Cthulhu (PDF only) creates a campaign setting of the American Old West well supported with rules. Shadows over Stillwater (PDF included) adds a mini-campaign, additional town, and adventure seed as well. Down Darker Trails also recommends other books from Chaosium that fit the Old West. It also continues the welcome tradition of 7E in providing the Keeper with a large range of optional rules to adjust the dials in her campaign setting.

Keepers will be able to run a campaign for months in the Old West and never run of ideas. And Keepers could try different versions, whether Pulp heavy or Cthulhu light and other options in between. Six-guns and pseudopods await your cowpoke. 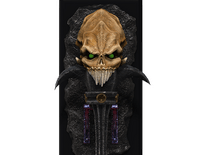 Geek Stuff Gulp! A Life-sized Wand of Orcus for your wall 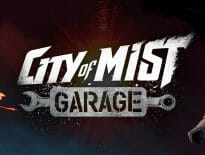